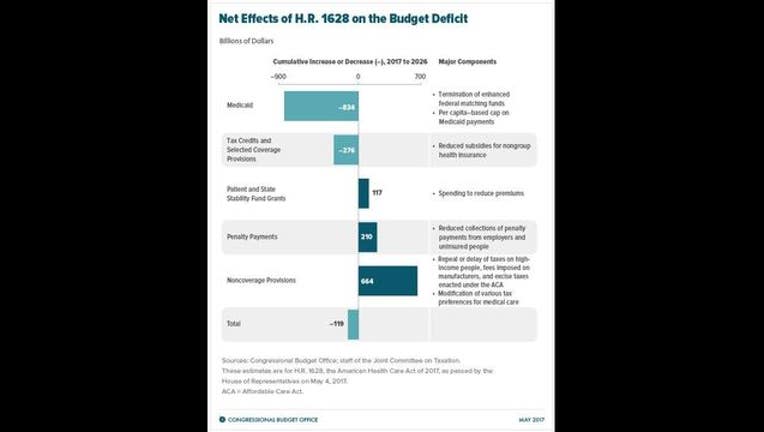 WASHINGTON, D.C. (KMSP) - An estimated 23 million Americans could lose healthcare coverage in the next decade under a bill to repeal and replace the Affordable Care Act--otherwise known as Obamacare--according to Wednesday estimates from the Congressional Budget Office, a nonpartisan research agency run by the legislative branch.

In broad strokes, the AHCA is estimated to reduce healthcare spending by over $1 trillion to finance $992 billion in tax cuts, ultimately reducing the deficit by $119 billion over the same time period.

Medicaid, a healthcare program for people with "limited resources" run through state governments, bears the brunt of these cuts, as well as subsidies for people purchasing individual health insurance outside of an employer-sponsored plan.

On the flipside, the largest tax cuts go to insurance companies and non-healthcare related investment taxes enacted by Obamacare. The AHCA also reduces the income threshold to claim tax deductions on medical spending.

Healthcare takes up an outsize role in the U.S. economy, clocking in at 17.8 percent of GDP in 2015 while rising precipitously since around 2000, according to the World Bank.

Under the Affordable Care Act, the general idea was to subsidize people's premium payments based on income, which, coupled with Medicaid and Medicare expansion as well as the individual mandate, would stabilize healthcare markets in most areas.

Though premiums continued to rise under the ACA, subsidies insulated people from those rises and in most states that expanded Medicaid and Medicare as directed by the federal government, healthcare markets largely stabilized, according to the CBO.

In (mostly rural) areas that did not expand those programs and in areas where enforcement of the individual mandate was unevenly applied, insurers tended to withdraw from the market, causing spiraling premium increases, the report said.

Around one-sixth of the American population lives in coverage areas the agency believes will become "unstable" due to the implementation of the AHCA and its rule changes, including the ability of states to modify policies concerning essential health benefits and pre-existing conditions.

"Premiums [in those areas] would rise over time, and people who are less healthy (including those with preexisting or newly acquired medical conditions) would ultimately be unable to purchase comprehensive nongroup health insurance at premiums comparable to those under current law, if they could purchase it at all," the report says.

Relative to current law, those increases could average close to 20 percent in 2018 and five percent in 2019, according to the CBO, though older adults would experience most of the increases and premiums would fall "substantially" for younger individuals.

Depending on who you ask the CBO estimates either proves your viewpoint or is wholly wrong, with opinions split even within the Republican Party.

The only certainty is that the AHCA is universally hated among Democrats, whose house members all voted against the bill in the first place.

"The Republican health care plan is cruel, irresponsible, and would have devastating consequences for millions of people in Minnesota and across the country,” Sen. Al Franken, D-Minn, said in a statement Wednesday. "Republicans need to abandon this harmful legislation, which is nothing more than a giant tax break for the wealthiest Americans."