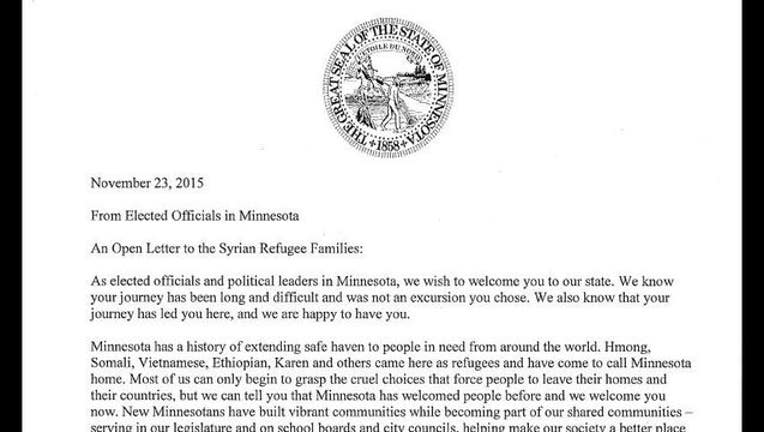 November 23, 2015
From Elected Officials in Minnesota

An Open Letter to the Syrian Refugee Families:

As elected officials and political leaders in Minnesota, we wish to welcome you to our state. We know your journey has been long and difficult and was not an excursion you chose. We also know that your journey has led you here, and we are happy to have you.

Minnesota has a history of extending safe haven to people in need from around the world. Hmong, Somali, Vietnamese, Ethiopian, Karen and others came here as refugees and have come to call Minnesota home. Most of us can only begin to grasp the cruel choices that force people to leave their homes and their countries, but we can tell you that Minnesota has welcomed people before and we welcome you now. New Minnesotans have built vibrant communities while becoming part of our shared communities – serving in our legislature and on school boards and city councils, helping make our society a better place to live. Some people have even come to like our cold winters, seasons they never had before.

Terrorists have attacked people and communities in your home country and in other nations, but they have also tried to attack the notion of our shared humanity. They have perpetrated the idea that there is more that divides us than unites us. They are wrong and we will not fall into this trap – one that leads to exclusion of people who need our help in the face of shared threats.

You may hear voices in the media and from politicians calling for us to close ourselves off and look ever inward as a state and nation. These voices do not represent the majority, nor do they speak to the best within all of us as a state or country. Fear should never overwhelm our belief in our common humanity and our commitment to care for others, as we would hope others would care for us in a time of crisis. Terrorists will not dictate our policies toward refugees and they most certainly will not dictate our compassion.

As a state with a proud history of becoming a new home to immigrants and refugees from around the world, we want to extend our sincerest welcome. We hope that you will be able to experience the promise of the Minnesota that we believe in – as a state with communities that value opportunity, inclusion, kindness, and a genuine commitment to building a shared future with all people who call our state home.