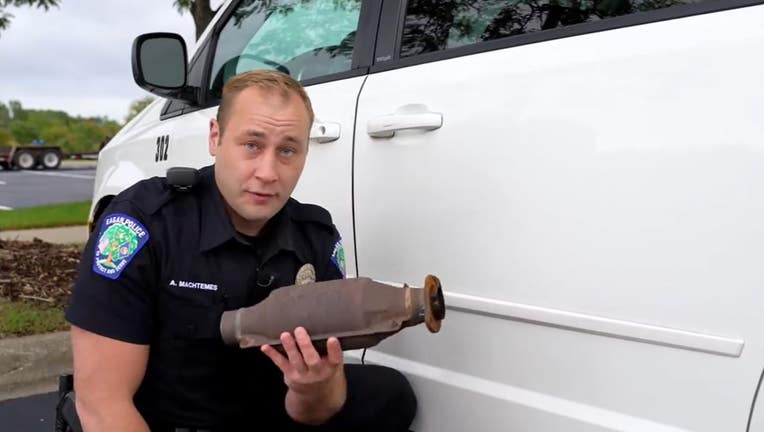 EAGAN, Minn. (FOX 9) - The Eagan Police Department is issuing a crime alert after a recent spike in catalytic converter thefts.Since April, Eagan police say they have recorded 76 thefts, with Hondas and Toyota Priuses being frequent targets.

To combat the thefts, police say they have placed bait cars throughout the city armed with camera to capture images of the suspect. It will also alert officers of a theft, who will be immediately dispatched to the scene.

Eagan, Minnesota police are reporting a spike in catalytic converter thefts over the past few months.

Police say thieves target catalytic converters, part of a car’s exhaust system that often contains a precious metal, and sell the pieces to scrap yards or remove the platinum and sell it to third-party metal dealers.

Catalytic converter thefts have been reported all over the Twin Cities metro this summer. In Eagan, September is on track to be one of the biggest number of losses to date.

Report suspicious activity immediately to police by calling 911. For example, if someone is walking through the area with a backpack, they have dirty clothing (can indicate they were underneath a vehicle -- dirty pants), and loitering near vehicles this might be a good time to call police. If you see suspicious vehicles in the area and hear power tools being used, it might be a good time to call.

Please don't wait until they leave, call police immediately. They usually use a "Sawzall" to cut the catalytic converter out of the exhaust system.

Park defensively in areas where your vehicle will most easily be seen by people passing by. For example, park under lights after dark or near windows at a business. Park in your garage if at all possible.

Consider etching your converter with your vehicle's license plate number in several different locations. This will help police track your property if it is stolen. If your converter is stolen, file a police report immediately after the theft is discovered.