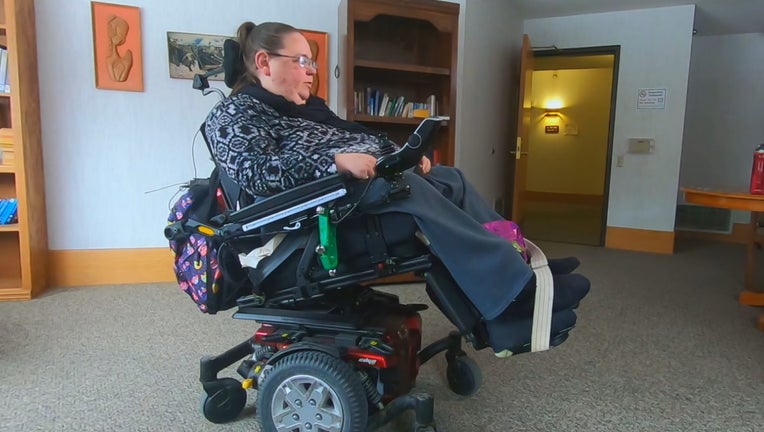 Getting out of doors, out of elevators and into a van is a challenge, but Ashen Diehl’s entire life is a challenge and has been for seven years - ever since she was run over by a driver who had inhaled or “huffed” aerosol keyboard cleaner while drivi (FOX 9)

DULUTH, Minn. (FOX 9) - A Duluth, Minnesota woman is trying to stop others from being injured or killed from huffing after she was left paralyzed from a crash in which the impaired driver had inhaled an aerosol keyboard cleaner. She has filed a lawsuit against Maplewood-based 3M, which manufactures the product.

Getting out of doors, out of elevators and into a van is a challenge, but Ashen Diehl’s entire life is a challenge and has been for seven years - ever since she was run over by a driver who had inhaled or huffed aerosol keyboard cleaner while driving.

A Duluth woman is trying to stop others from being injured or killed from huffing&nbsp;after she was left paralyzed from a crash in which the impaired driver had inhaled an aerosol keyboard cleaner.

It was August 2012 in Duluth when Diehl was on the sidewalk walking with her nine-year-old daughter to the grocery store. At the same time 29-year-old Robert Buehlman had inhaled or “huffed” compressed gas from a can of 3M dust remover. He apparently blacked out and lost control, hitting her. In 2015, he was sentenced to one year of jail and probation, but Diehl says she got a life sentence.

“I knew right away the legs didn’t work, the chair ya know, but there’s so much more,” said Diehl. “Sidewalks I can’t use. I have to drive in the street at times, I can’t go to the bathroom by myself, I can’t use a kitchen table, I can’t cook food. I can’t get up and go outside whenever I want, I have to wait for someone to help me. I can’t open doors anymore.”

Now, Diehl is suing 3M, maker of the dust remover that Buehlman inhaled.

“We’re going to ask what they knew, when they knew it, and what they did about it,” said Phil Sieff, her attorney.

The original case was tossed out by district court. The Minnesota Court of Appeals, however, reversed that decision, arguing the district court needs to determine if it was reasonable for 3M to have expected a danger to Diehl – or an innocent bystander –when it manufactured and sold the dust remover. 3M did know “huffing” was an issue as there were warning labels on the cans and a bitterent was added to the compressed gas to deter misuse. Diehl’s attorney is prepared to argue the bitterent doesn’t even work and 3M knew it.

In Diehl’s case, there was bitterent added to the dust remover the driver inhaled before the crash. Sieff says the additive doesn’t even leave the can.

“It was not being released with the vapor spray, but was rather just sitting at the bottom of the can because it didn’t mix correctly with the vapor,” said Sieff.

The chemical in the can that causes the high is difluoroethane or DFE and abusing that compressed gas has been an issue for decades. It’s a cheap and fast high that can be addictive. Hennepin County Medical Center’s Poison Control Center gets about 300 calls a year about inhalants. There are overdoses and deaths because of it. It’s important to also note the number of innocent bystanders killed or injured by people abusing and inhaling various aerosols. There were 11 killed in Minnesota and Wisconsin in just the last two and a half years. Earlier this week, a driver who allegedly huffed was found guilty for hitting and killing three Wisconsin Girl Scouts and an adult volunteer last year.

“We’re talking about innocence, we’re talking about people who are just driving with their kids, coming home from hockey practice, or whatever who get taken out by someone who has utilized this product to achieve a state of intoxication that far exceeds the legal limit for alcohol,” said Sieff.

While Diehl sometimes thinks about the life she could have had, she is grateful to be alive.

“When you go through an accident like this and you’re told you died, you had heart attacks, you were on the table dead and they bring you back, it’s extra time,” said Diehl.

From her and her attorney’s perspective, 3M was focused on its bottom line and not the safety of its consumers or the users may hurt others by abusing a product designed to clean keyboards.

“It’s about manufacturers who knew that the volume of sales far exceeded what was reasonable for its intended use,” said Sieff.

If Diehl's case is not thrown out again or settled, it could go to trial in nine months to a year.