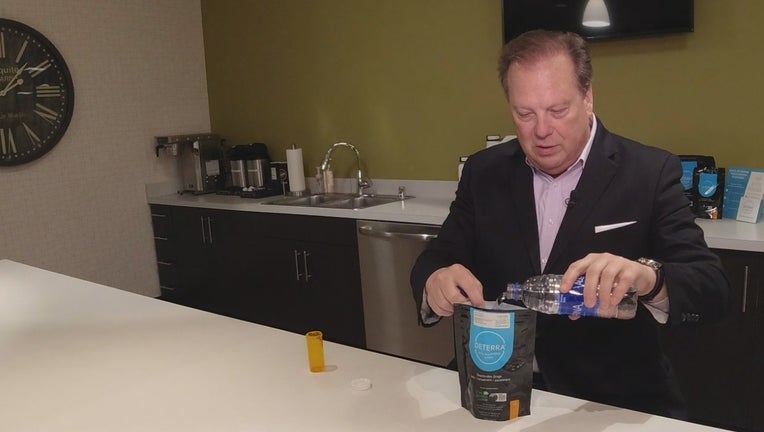 The bags, that utilize an activated carbon,, just need a little added water to work. (FOX 9)

(FOX 9) - It’s Drug Take Back Month in Minnesota and a little bag made by a Minnesota company is helping police agencies across the state accept pills that, in the wrong hands, can harm.

Hennepin County Sheriff Dave Hutchinson says the county has seen 285 overdoses in the last year. The most recent data from the CDC shows half of Americans have had one prescription in the past 30 days.

Drug-neutralizing bags made by Minnesota company used by police agencies

It’s drug take back month in Minnesota and a little bag made by a Minnesota company is helping police agencies across the state accept pills that, in the wrong hands, can harm.

One in five people report taking three or more meds in the past month and the latest data from the National Institutes of Health shows two out of every three prescription meds go unused.

Hutchinson knows what happens when they fall into the wrong hands.

"If we can prevent a teenager from experimenting and getting addicted, that’s mission accomplished," said Hutchinson.

The Sheriff’s Office is distributing drug disposal bags called Deterra, which are made by the Verde Company in Minnetonka.

The bags contain an activated carbon that neutralizes drugs. CEO Jason Sundby says all you do is dump in your leftover pill and add water.

"Fill it about halfway full, leave it open for about 20 seconds for the air to come out of the carbon, you zip it closed, it has a double zip tie, you shake it a couple of times and you throw it in the household trash," said Sundby.

It’s that simple, and for many people, it’s more convenient than taking their unused prescriptions to the local police department for disposal.

"We’ve now been able to deactivate and dispose and destroy over 650 million dosage units," said Sundby.

The goal is a billion by 2022, all with a little neutralizing bag that law enforcement wants you to use.

"We want to stop overdoses of all kinds, all drugs and we just want to make sure people are on the right track of being healthy," said Hutchinson.

The Hennepin County Sheriff’s Department distributed 11,000 Deterra bags in 2019. If you would like one, they will send one to you at no cost.

The email address is drugdisposal@hennepin.us.

Deterra systems also has a grant to give away their bags through the end of the week.