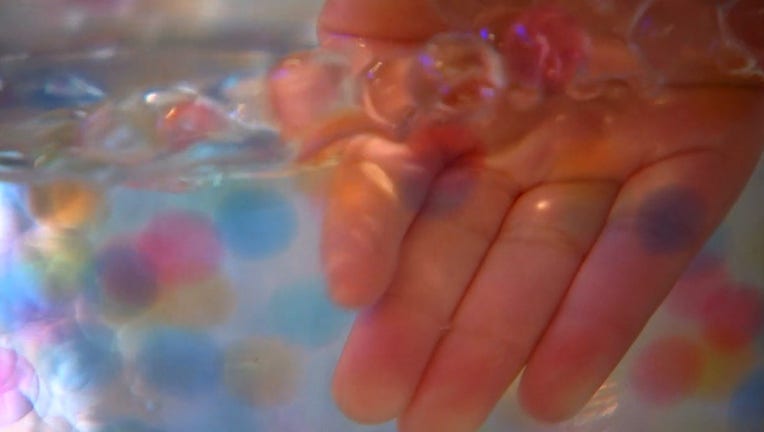 Water-absorbing beads can be dangerous if swallowed, doctors say. (FOX 9)

(FOX 9) - Water-absorbing beads, sold as children’s sensory toys or as decorations for adults, can keep even the youngest ones occupied. While the gel beads are not toxic, doctors warn there is a danger.

"The problem with them that we see from Poison Control, it’s not that they’re poisonous per say, they have no poison in them, the problem is they expand and can cause problems if you swallow a lot of them," said Dr. Ann Arens, the associate medical director of the Minnesota Poison Control System.

Calls to poison control about the beads have officials sounding the alarm. While they are not themselves poisonous, the beads expand in water, creating a hazardous situation for those who ingest them.

The Minnesota Poison Control System says they’ve been hearing from more parents on their hotline. In fact, calls about the beads have increased 75 percent from 2019 to 2020 with numbers on track to be higher this year too.

"Presumably because people are at home more especially during COVID-19, these have become more popular recently," said Dr. Arens.

The Poison Control Center tweeted a warning Wednesday that the beads can expand up to 200 times their original size, even inside the body.

"If one gets into a child’s ear, which some children like to put stuff into their ears, it can expand if it gets wet and it gets stuck and there have been reports of rupturing their ear drum or even permanently losing their hearing from that," said Dr. Marissa Hendrickson a pediatric emergency medicine physician, at Masonic Children’s Hospital.

These doctors don’t want to ruin anyone’s good times, but say parents need to be aware. There doesn’t always have to be poison involved for things to turn dangerous.

"These are things that are fun," said Arens. "They’re things that you can have at home, the most important part is just of course, as usual, that you use these under supervision with your children."