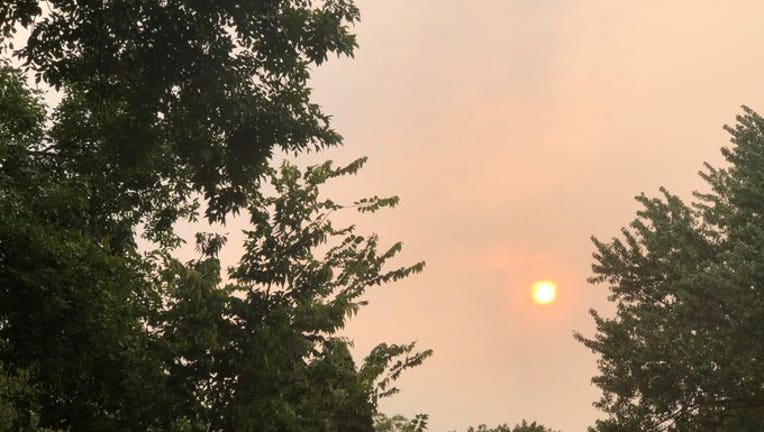 A hazy sunrise in Burnsville, Minnesota as smoke from wildfires out west moves into the upper atmosphere. (Cody Matz/FOX 9 / FOX 9)

(FOX 9) - The smoke from wildfires burning on the west coach is stretching clear across the country, even pushing into Mexico, Canada and Europe.

Due to the smoke, breathing is becoming increasingly difficult for those living out west. And the smoke is raising questions about further health concerns along the west coast and elsewhere.

The smoke from wildfires burning on the west coach is stretching clear across the country, even pushing into Mexico, Canada and Europe.

The good news for Minnesota is that distance is working in our favor. We spoke with a Mayo Clinic pulmonologist Thursday who reminded us that the solution to pollution is dilution.

Close to the fires, there are high concentrations of particulates from the burning cellulose in the trees. But there is also high levels of industrial chemicals from the homes and buildings that are burning.

Over Minnesota, we've seen the upper atmosphere smoke all week long which has filtered the sun.  Our ambient air quality has remained quite good at the surface but the smoke can be irritating to people with chronic breathing conditions.

Even though we live in the world of COVID-19, the symptoms of smoke irritation are quite different and do not result in a fever or body aches.

“Wildfire symptoms are going to be more consistent with just upper respiratory irritation," said Dr. Cowl. "Things like a scratchy sore throat. Things like a mild unproductive cough, and maybe even some vocal cord irritation. And that’s why it’s so important to stay adequately hydrated to allow as we’ve said before the mucus ciliary escalator, those natural protective mechanisms in the upper airway to be kicking in and helping clear the airway of smoke and dust and chemical fumes.”

Dr. Cowl says the average person might notice some mild throat irritation from the smoke, and that's it.