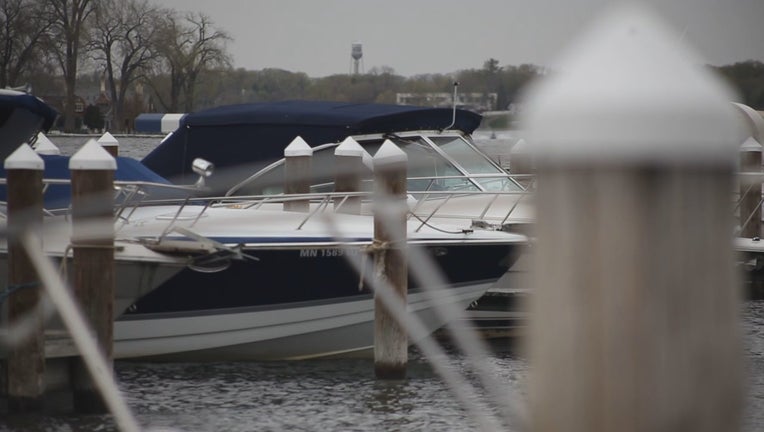 MINNETONKA, Minn. (FOX 9) - With a beautiful weekend on the way, plenty of Minnesotans are looking to hit the water.

As the pandemic moves into May, everyone is looking for ways to get out of the house while staying safe. Marinas opened back up two weeks ago, and lakes have been buzzing with activity.

With a beautiful weekend on the way, plenty of Minnesotans are looking to hit the water

But the increased activity has the Department of Natural Resources urging boating to follow the same guidelines on the water as they do on the land.

"We are hearing a lot of people itching to get out," said Gabriel Jabbour of Tonka Bay Marina.

At Tonka Bay Marina on Lake Minnetonka, they’ve been working around the clock to get boats in the water.

"A lot of people are anxious and asking to be on the water and obviously we can’t put everyone on the same day." he said.

"Just try to keep the people you live in the same residence in with you on a boat," said Lt. Shane Magnuson with the Hennepin County Sheriff’s Office Water Patrol.

Social distancing is still in place on land and in the water. And while there have been some concerns about groups of boats tied up together on the lake, the Hennepin County Sheriff’s Office and DNR say they haven’t seen many issues. If they do, citations likely will not be written.

"We’d prefer this to be more of an educational opportunity for people rather than write a bunch of citations and take enforcement action," said DNR Conservation Officer Arnaud Kpachavi.

What they have seen are more boat fires like one Thursday on Lake Minnetonka. One person was injured.

"We've actually had three calls for boat fires already this year... we average usually only one boat fire a year," said Lt. Magnuson. "So, making good choices on how you’re taking care of your boat, that really can help lead to safety."

The sheriff’s office wants to make sure a rush to get out doesn’t sacrifice safety.

"General boat safety stuff is important maybe even more so this year just because of the sheer number of boaters we’ve had early and we’re probably going to continue to see throughout the year," he added.

Some of the other safety checks to keep in mind: Make sure to have life jackets for everyone on board, make sure all your equipment works and turn on the blowers before you start your boat.