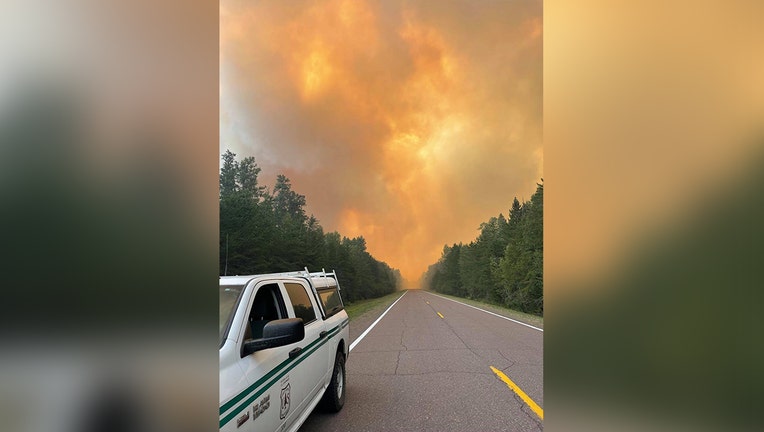 The Greenwood Fire jumped over to the west side of Highway 2 Friday afternoon.  (U.S. Forest Service - Superior National Forest / FOX 9)

FINLAND, Minn. (FOX 9) - The Minnesota Department of Natural Resources is temporarily closing all the campsites in George Crosby Manitou State Park along the North Shore out of an abundance of caution due to the Greenwood Fire.

The park’s 22 campsites are all remote backpack-in sites. Rachel Hopper, the visitor services and outreach section manager for the DNR’s Parks and Trails Division, said there is no immediate danger in the park from the fire, but the DNR is worried they would not be able to evacuate the campers if the situation changes because the sites are difficult to access.

The DNR has contacted the current campers in the park and asked them to vacate their sites by 4 p.m. on Wednesday. All upcoming campsite reservations are canceled through at least Labor Day. The park remains open for day use.

Both the Greenwood Fire in the Superior National Forest and the wildfires burning across the border in Canada can be seen from Ely, Minnesota. Video credit: Chris Ellerbroek.

Additionally, the DNR is closing backcountry sites in two other state parks, Itasca and Lake Bronson, as well as the backcountry camper cabin at Hayes Lake State Park. There are no wildfires currently burning near those particular parks, but the drought conditions and extreme fire risk in northern Minnesota has the DNR concerned because the sites are so remote and would be hard to get to in an emergency.

The DNR is offering full refunds for people whose reservations are affected by the closures. They are also allowing people to change their reservations to a different date or park free of charge.

The Greenwood Fire has been burning in the Superior National Forest since Aug. 15. It started near Greenwood Lake about 15 miles southwest of Isabella and now covers nearly 19,500 acres.