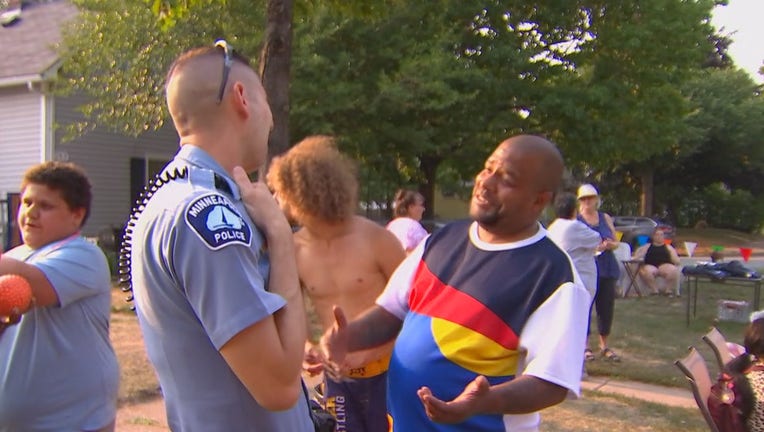 Rob King of the Lind-Bohanon neighborhood in north Minneapolis talks to a Minneapolis police officer during National Night Out on Aug. 3, 2021. (FOX 9)

MINNEAPOLIS (FOX 9) - The debate over Minneapolis policing, which is headed for the November ballot, was on full display Tuesday night during National Night Out.

The event started 30 years ago as a way to build relationships between police officers and the communities they serve. However, the evening highlighted the divide in Minneapolis.

Divide over policing in Minneapolis on display for National Night Out

The debate over Minneapolis policing, which is headed for the November ballot, was on full display Tuesday night during National Night Out.

Relationship building was happening in the Lind-Bohanon neighborhood of north Minneapolis with neighbors at the National Night Out event welcoming officers.

"I love that we’ve been able to come together and do this, and I love that every year we’ve done it we have the police here," said Rob King, a resident of the Lind-Bohanon neighborhood.

However, that was not the case at every gathering. Minneapolis National Night Out Coordinator Luther Krueger told the Minnesota Reformer that only 134 of the roughly 1400 registered events said they wanted an officer there. That’s less than 10 percent.

"We deserve better," said Claudia Zavala of Take Action Minnesota. "Better than neglect at best and abuse at worst."

The people behind the Yes 4 Minneapolis campaign, a ballot measure that would eliminate a minimum officer requirement and replace the police department with something new, held their own event Tuesday.

"We must remember that safety exists beyond policing," said Justin Toliver of Black Vision.

However, King says he can’t get behind that movement.

"There’s been three or four times that we’ve had shootouts right in front of our house," said King. "My bedroom window is right there."

He and several neighbors say they’ll vote no on the ballot measure and instead focus on relationship and reform.

"We need police," said Sheila Scott, a 33-year resident of north Minneapolis. "We need good police. We need the bad police gone, but we need police."