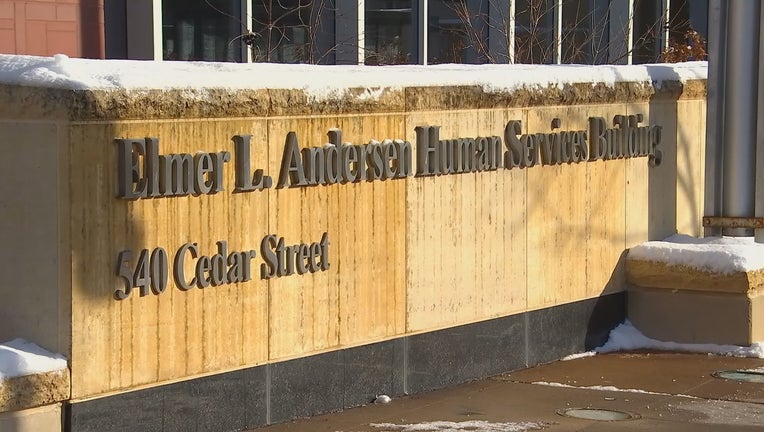 ST. PAUL, Minn. (FOX 9) - A whistleblower who reported wrongdoing at Minnesota’s Department of Human Services is on a 30-day paid leave she requested because she didn’t feel safe at work.

Compliance officer Faye Bernstein asked for the leave on Nov. 13 after complaining that her reports to internal auditors had been shared with supervisors that she was reporting on. Her initial concerns were about errors in DHS contracts.

Compliance officer Faye Bernstein asked for the leave on Nov. 13 after complaining that her reports to internal auditors had been shared with supervisors that she was reporting on. Her initial concerns were about errors in DHS contracts.&nbsp;

“DHS has put me in a situation where I fear not only for my professional security, but also my personal safety and the safety of my child,” Bernstein wrote in her request. Department officials granted the leave two days later.

Bernstein first raised concerns about contract errors this spring, just as DHS was about to face a tidal wave of revelations about mismanagement. DHS officials now say $106 million in wrongful payments have been uncovered in 2019 alone.

Bernstein’s account of a hostile work environment stands in contrast to what the head of Minnesota’s biggest state agency declared to lawmakers Monday: that no whistleblower at the department would face suppression or retaliation for reporting their concerns.

“Sunlight is always the best disinfectant,” Commissioner Jodi Harpstead said at a House Health and Human Services committee hearing. “We will not suppress or retaliate against anyone inside DHS who comes forward pointing to problems, and we intend to have a culture where people feel encouraged to surface problems.”

But Bernstein has described a much different atmosphere.

In an interview with FOX 9 last month, she said retaliation against her had gotten worse since she first shared her concerns with a Senate committee in August. Bernstein said one department official had recommended that she get therapy, a suggestion Bernstein found offensive.

Department officials have said therapy is part of the employee assistance program offered to workers who are going through stressful situations.

Meanwhile, more questions about financial issues at DHS have surfaced.

In January, an outside consultant hired by the agency estimated that there had been $71 million in fraud within Minnesota’s child care assistance program over the previous five years.

But a draft report to DHS officials five weeks earlier, the consultant had given an estimate that was nearly 50 percent higher: $105 million over the five-year period.

The final report was released publicly earlier this year. The draft report was obtained by FOX 9 last week. Under Minnesota law, draft documents are public. 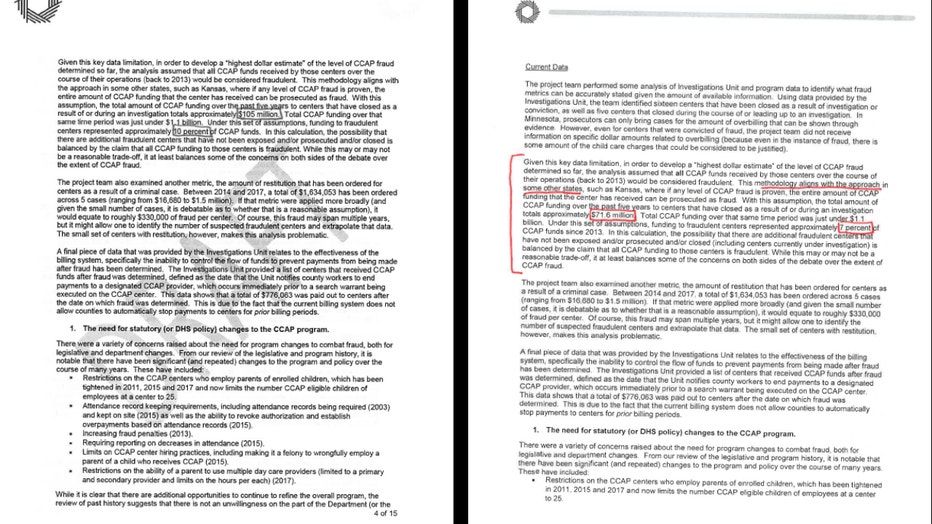 The draft report (left) has different numbers compared to what was used in the final report (right). (FOX 9)

In an email to FOX 9, a DHS spokeswoman denied the agency had played a role in the change.

“DHS did not direct PFM to make any changes in the report,” said Jeanine Nistler, the spokeswoman. “After the initial draft, PFM determined that it would be more accurate to narrow its focus to centers that had actually closed as the result of an investigation or that had closed before or during an investigation.”

Monday, Harpstead outlined $106 million in payment issues that have come to light in 2019. Among them:

•    $29 million wrongfully sent to two Native American tribes for opioid treatment, without any documentation of who approved the payments, when, or why. It’s unclear who will ultimately repay the federal money.
•    $70.6 million improperly spent on chemical dependency treatments, including $61.8 million the state must repay the feds and $8.8 million that Minnesota counties must repay.
•    $3.7 million wrongfully spent on health insurance coverage for Medicaid enrollees who were deceased.
•    $1.8 million improperly collected from some MinnesotaCare recipients that DHS must refund.
•    $727,000 wrongfully collected from welfare recipients who shouldn’t have received that money in the first place, but were not required to repay it. DHS now must refund the so-called “over-repayments.”

Harpstead, who took over as DHS commissioner in September, told House lawmakers this week that she has implemented “stop-gap” financial controls that will require more signatures before funding is released. Many of the errors predated her time as commissioner.

“Let me say now, the buck stops right here,” Harpstead said, pointing at herself. “We’re planning to use the best processes that we know that have been proven in other organizations to tackle these issues and move forward in a more trustworthy way than we have seen in this area in over a decade.”

Harpstead said Gov. Tim Walz will announce in coming days whether he plans to break apart the agency into smaller pieces, as some have called for. Speaking to reporters on Monday, Walz did not directly say what he planned to do, but used an analogy.

“If you’re going to have a job cutting down a tree, you should spend the bulk of your time sharpening the ax,” he said. “I think we have spent our time sharping that ax and after today, it’ll be time to start thinking about what that alignment looks like.”