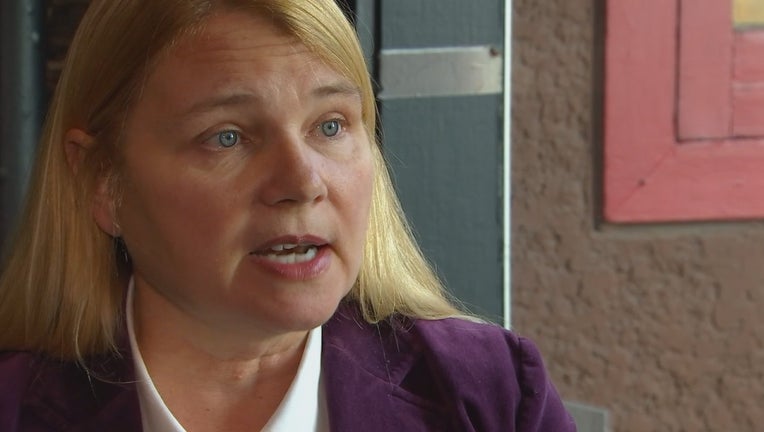 Faye Bernstein, a compliance officer at the Department of Human Services, says she has faced retaliation after speaking up about issues at the DHS. (FOX 9)

Faye Bernstein, a compliance officer at the Department of Human Services, said her supervisors have dismissed her concerns, excluded her from meetings, and taken work away from her. While DHS has opened investigations, Bernstein said one official told her to seek therapy, a comment she found offensive.

She helped uncover problems at Minnesota's DHS and now, as a whistleblower, she feels she's being treated unfairly.

The 14-year DHS employee first reported problems within state contracts this summer, and says she was led out the building and had her employee badge taken from her. After testifying to a state Senate committee in August, Bernstein said she expected her situation to improve.

“It actually did the opposite,” Bernstein said, in her first TV interview. “If anything, I have experienced more retaliation since then.”

Bernstein first raised her concerns during a chaotic summer for DHS, the state’s biggest agency. Four top officials resigned. The state’s top watchdog found the department had given $29 million in unauthorized payments to two Native American tribes without knowing who, why or when the decision had been made.

Agency officials said Tuesday that they could not respond to Bernstein’s specific allegations because state law prevents that.

There are several open investigations at the agency, Sarah Berg, a DHS spokeswoman, said.

“When I say I won’t tolerate retaliation against employees, it’s not just talk,” Commissioner Jodi Harpstead said in an email. “We have systems and processes in place for employees to follow when they need to raise concerns. Investigating those concerns allows us to gather all of the facts. While it can be frustrating, until investigations are complete, there is a period of time when everyone is waiting.”

Bernstein said she wanted to see an outside investigation. She said she had lost confidence in an internal review of her complaint after an interaction with a DHS official.

“His focus was to highly encourage me to use the therapy of our employee assistance program, which I found a little bit offensive,” Bernstein said.

It is not uncommon for DHS to refer employees to the employee assistance program in times of stress or to deal with issues in day-to-day life, Berg said.

The state’s top watchdog, Legislative Auditor Jim Nobles, told FOX 9 last week that he was monitoring Bernstein’s allegations. Nobles did not rule out launching an investigation.

The legislative auditor’s office just finished an investigation of the unauthorized payment issue.

State Sen. Jim Abeler, the chairman of the Senate’s human services committee, said he feared that Bernstein’s situation would stop other employees from coming forward with information about wrongdoing.

“Why would anybody working there raise a concern and stick their head out of the gopher hole and tell anybody that there’s some problems?” Abeler, R-Anoka, said in interview. “I would not.”

Bernstein said DHS has a culture of punishing dissenting voices. She said she expected more unauthorized payments would come to light, after the tribal overpayment issue.

"We probably have a very hesitant workforce. Very hesitant to point out that something we’ve been doing for years, we should’ve never done on day one," she said.

Bernstein said she has the backing of her union, the Minnesota Association of Professional Employees. While she has not been fired, she said she feared getting demoted.

She said the retaliation she's faced was sending "a very bad message" to other DHS employees to "toe the line."

Bernstein said she didn't agree with being considered a whistleblower.