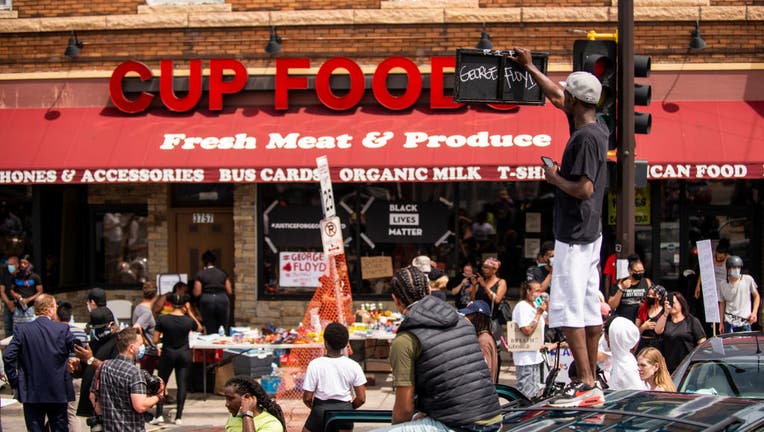 MINNEAPOLIS, MN - MAY 27: Protesters gather outside the Cup Foods on Chicago Avenue and 38th Street on May 27, 2020 in Minneapolis, Minnesota. The intersection has become the site of an ongoing protest after the police killing of George Floyd. (Photo

MINNEAPOLIS (FOX 9) - Outside his store window, there's a neighborhood he knows well, but pain like he’s never seen before.

Mahmoud Abumayyaleh is the owner of Cup Foods, a Palestinian who’s been on this corner for 31 years.

It was in Cup Foods that George Floyd allegedly tried to pass a phony twenty dollar bill. &nbsp;

"We’ve been in this community as insider not an outsider,” he told FOX 9.

It was in Cup Foods that George Floyd allegedly tried to pass a phony twenty dollar bill.

"Um someone comes our store and give us fake bills and we realize it before he left the store and we ran back outside, they was sitting on their car," read the 911 transcript released by the city.

It happened at least a dozen times in the last two years, 258 calls in all.

The surprise is that police even bothered to show up.

"This anger needs to be directed to the people who assaulted and murdered George Floyd,” Abumayyaleh said.

The store provided its own video surveillance to the BCA, but Abumayyaleh said it shows what everyone has already seen by now.

In fact, his nephew tried to intervene, but was pushed back.

One of our employees called and said this guy is being choked and I said, 'go ahead and call the police on the police,'" Abumayyaleh said.

Call the police on the police. Let that sink in for a moment.

And this too, Abumayyaleh intends to pay for George Floyd’s funeral, not because he has too, but because it happened outside his front door.

And because this is his community too.

"Always welcomed and been welcome and want to be here for 31 more years," Abumayyaleh concluded.