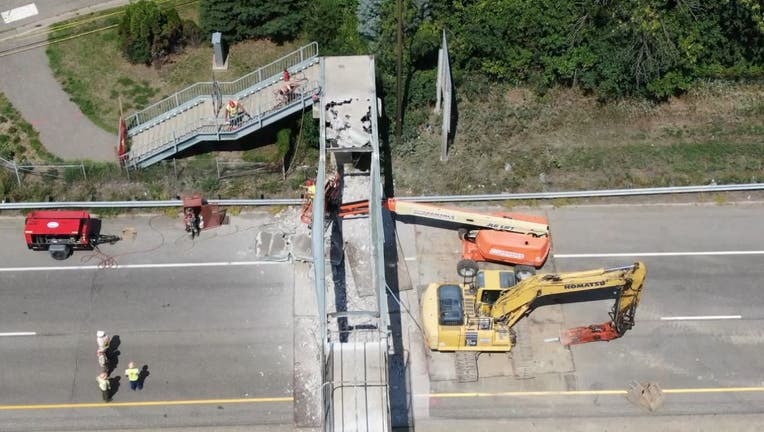 Crews work to remove a pedestrian bridge over Highway 62 after it was hit by a truck. (FOX 9)

EDINA, Minn. (FOX 9) - Highway 62 in Edina is back open Wednesday night, ahead of schedule, after a crash on Tuesday left Crosstown westbound lanes from I-35W to Highway 100 closed.

MnDOT says the bridge just east of Highway 100, which leads from West 64th Street in Edina over the highway to Rosland Park and Lake Cornelia, was damaged after an over-height truck load hit the bridge Tuesday morning around 11 a.m.

The Minnesota Department of Transportation hopes to reopen westbound traffic on Highway 62 between I-35 and Highway 100 by Thursday morning, after the roadway was closed Tuesday due to a damaged pedestrian bridge.

Due to the damage, Highway 62 was closed until the bridge can be removed. Crews were working on Wednesday to remove the safety cage and handrails on the pedestrian bridge.