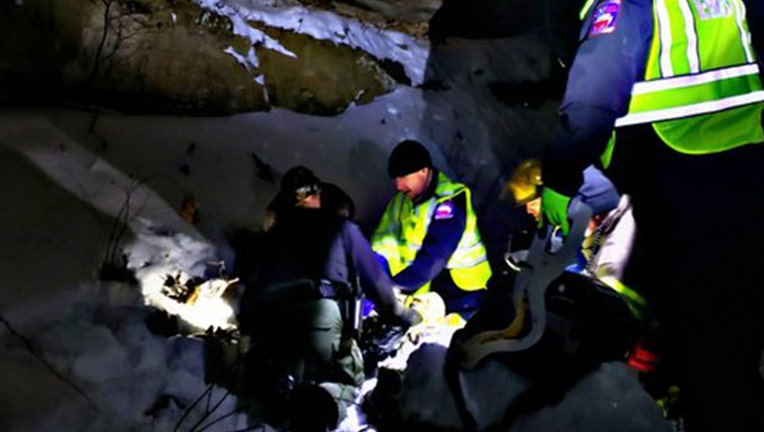 A 19-year-old man who was found unresponsive after falling from a 30-foot-tall rock cliff at Interstate Park in Taylors Falls, Minnesota. (Chisago County Sheriff)

TAYLORS FALLS, Minn. (FOX 9) - Deputies in Taylors Falls, Minnesota used squad sirens to help narrow down the location of a 911 caller, leading them to a 19-year-old man who was found unresponsive after falling from a 30-foot-tall rock cliff at Interstate Park.

The victim was snowboarding when he plunged over a cliff at the park.

The snowboarder was rescued by deputies in steep and challenging terrain after a search that used sirens and dispatchers to locate the lost victim.

Chisago County deputies were called to the area of U.S. Highway 8 and Milltown Road at 5:30 p.m. Sunday. The 911 caller didn’t know their current location, but deputies were able to use the caller’s coordinates to get a general location. While operators stayed on the line with the caller, deputies used their squad sirens to communicate with the caller, who relayed the sounds to the operator, until they found the specific location.

The accident occured on steep, snowy, icy terrain that, when combined with the cold, made for a tricky rescue. Deputy Kyle Jones, of the Chisago County Sheriff's Office, was the first on the scene. He started out on foot and communicated with dispatch who was talking to the caller to find out where he was.

Deputies found Luke Zajac, 19, at the base of the cliff, which was only reachable by foot. Crews executed a low-angle rope rescue in order to reach the man. Zajac was lowered to safety and transported to the emergency room, then airlifted to a Level 1 trauma center. He is now listed in good condition and his injuries are not believed to be as bad as they were at first.

The sheriff's office shared a photo of their rescue efforts, coupled with the message, "This picture does not capture the magnitude of the terrain but we do not advise snowboarding off of cliffs. No matter the terrain, we are only one call away!"