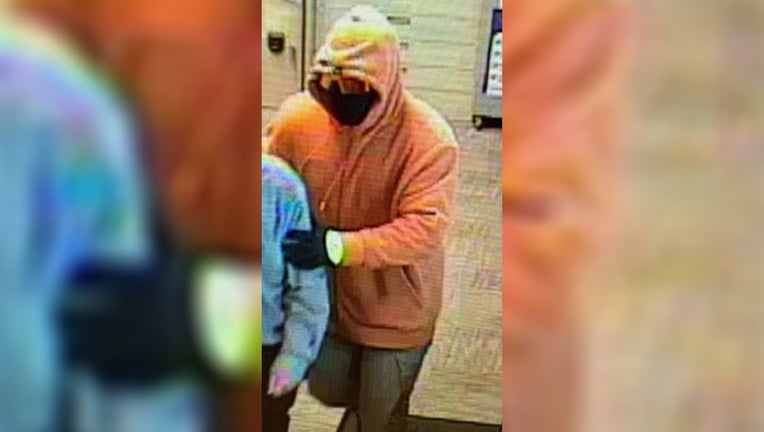 Pictured is a suspect believed to be responsible for two bank robberies in the metro.(Apple Valley Police Department)

SAVAGE, Minn. (FOX 9) - Multiple agencies are investigating the circumstances of a robbery and attempted robbery of two different credit unions Tuesday. Police believe the same suspect was involved in both incidents.

According to a press release provided by the City of Savage, at around 12:01 p.m. officers were dispatched to the Wings Financial Credit Union on the 1400 block of Highway 13 South on a report of a robbery that just occurred. The Savage and Prior Lake police departments, as well as, the Scott County Sheriff’s Office all responded.

Officers determined a lone suspect had entered the bank, approached a bank employee, and began yelling at the employee while demanding money and pointing a handgun.

When the employee told the suspect there was no money in the vault, the suspect left the bank through the front door in an unknown direction without any money, according to police.

According to witnesses, the suspect was a man wearing an orange and yellow sweatshirt, gray sweatpants, ski goggles, and a black mask covering his whole face.

Later on at around 1:37 p.m., Apple Valley officers responded to the 14200 block of Cedar Avenue to the Royal Credit Union on a report of a robbery.

Police learned a man with a handgun jumped over the counter and had an employee open the vault. The suspect was also described as wearing an orange construction-style jacket, dark pants, and a ski mask. He fled on foot prior to the officers’ arrival.

Apply Valley Police released an image captured on surveillance footage of the alleged suspect on Wednesday. Authorities said the two bank robberies were believed to have been done by the same person.

Anyone with information can contact Detective Horazuk with the Apple Valley Police Department at 952-953-2878.