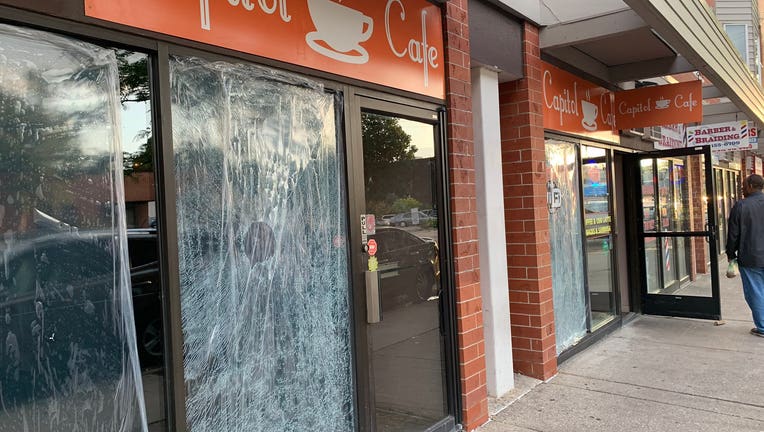 MINNEAPOLIS (FOX 9) - Members of the Seward neighborhood in Minneapolis are showing their support after a vandal struck several East African-owned businesses.

Thursday, police announced a 36-year-old man has been arrested in the case. According to investigators, the man vandalized six businesses along the 2400 block of Franklin Avenue early Wednesday morning.

Members of the Seward neighborhood in Minneapolis are showing their support after a vandal struck several East African-owned businesses.

"Five or six rocks in, I woke up and then I heard two loud noises and I knew something was up," said neighbor Tiger Worku.

It’s not the kind of sound you want to hear, but that is what neighbors and business owners along East Franklin Avenue woke up to Wednesday morning.

"I was just totally shocked and didn’t know the extent of it until just a little bit ago," said neighbor Terri Parks.

Surveillance video showed a man throwing something at a window Wednesday morning. Surveillance video shows the vandal tossing objects at the windows.

While police have announced the arrest, the motive behind the crimes has not been released.

"We think it's really important as members of our community to stand up and support business owners and to not be silent when bricks are thrown through windows," said Minneapolis business owner Danny Schwartzman.

Thursday, members of Main Street Alliance, a group of businesses around the area, are figuring out a plan to help.

"Clearly, there will be costs that aren’t covered by insurance and we want to help them by raising money for our community to cover the cost of repairing it," added Schwartzman.

It’s a reminder that the kind of acts that happened this week won’t be tolerated.

"This will make a difference because you see the whole community coming together and supporting the business and the business owner as well," concludes supporter Mohamed Barre.

Among the support, a GoFundMe online fundraiser has been created to support the business owners. Along with other plans, two events on Saturday will back the businesses after the vandalism. First, from noon to 5 p.m., the King's Fair at Matthews Park will offer space for neighbors to show solidarity.

From 4 p.m. to 5 p.m., the Milwaukee Avenue Peace Celebration will celebrate the International Day of Peace. Organizers are urging community members to patronize the businesses that day.