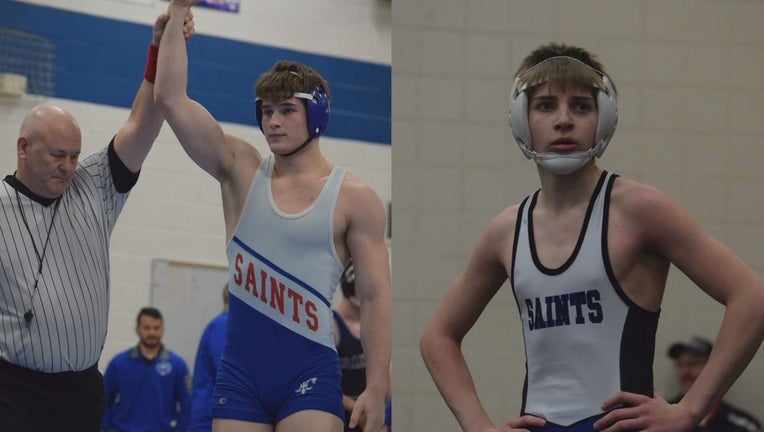 Kegan Koshiol, 15, and McKinley Erickson, 16, were heading north on 220th Street in St. Croix Falls when their SUV hit ice and rolled over, hitting several trees.

The two beloved wrestlers died in a car crash in St. Croix Falls, Wis. over the weekend.

First responders attempted to revive Koshiol, but he died at the scene. Erickson was airlifted to Regions Hospital in St. Paul but later died.

According to the teens’ wrestling coach, the pair was on their way to the weight room for an early work-out.

“McKinley would seek out younger kids and take them under his wing... he was on his way to work out that morning,” said head wrestling coach Joe Raygor.

The head football coach said Erickson, who was also on the football team, was always mentoring younger athletes.

“He was never too big for anybody in his head,” said Grant Belisle. “He knew it was the right thing to do. If a kid needed some guidance he would pick them up and bring them there, bring them to the weight room, bring them anywhere.”

Meanwhile, Koshiol was remembered for his larger than life personality.

“Keegan was a character. He would come into a room and just get people laughing,” said Raygor.

The crash occurred one day before wrestling sectionals. Raygor gave teammates the option to sit out or compete.

“We left it up to the kids… We had two say they couldn’t do it,” he said. “Both parents of the kids who passed reached out and told the kids to kick butt and that they would be cheering for them.”

Five members of the St. Croix Falls wrestling team will compete in the state tournament this Saturday in Madison, Wisconsin.

The St. Croix Falls school district continues to offer support to student and staff that need it.