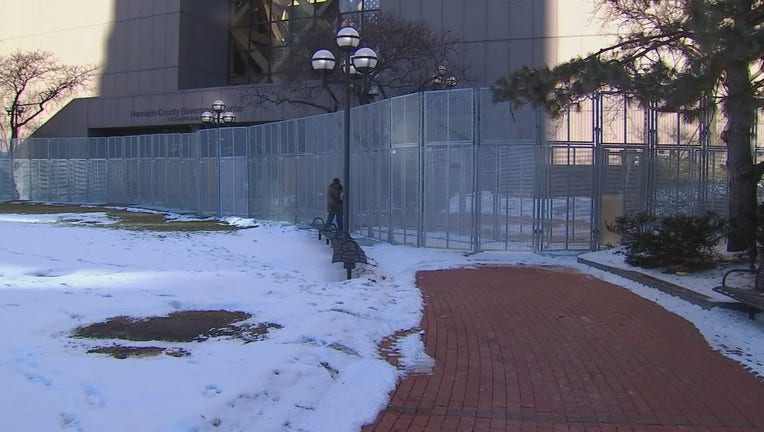 Officers were honing in on their message one week before former Minneapolis police officer Derek Chauvin’s trial in the death of George Floyd, but some community members don't think additional fencing and security measures will help with the city's healing.

Community members wary of Operation Safety Net ahead of trial

Operation Safety Net brings together local and state law enforcement agencies to respond to any potential civil unrest during the trial. The Hennepin County Sheriff’s Office said they have plans to step up their online presence to monitor potential threats.

"[We’ll] provide Operation Safety Net with intelligence gathering as needed to help stop any sort of violence," said David Hutchinson, Hennepin County Sheriff, adding, "We’re going to use technology and social media to see what these organized groups are doing."

Physical barriers like fences, barbed wire, and concrete pillars will surround government buildings, and there will be at least 3,000 law enforcement officers from across the state to assist with security throughout the Twin Cities. The National Guard will also be on standby.

"We’re going to be as kind as we can be and sympathetic to the trauma that some people feel, but don’t mistake our kindness for weakness," Hutchinson added.

Some residents, however, worry about police behavior.

"I was peacefully protesting at a daytime protest and without warning, I was shot by the Minneapolis Police Department with a rubber bullet and lost my left eye," said Soren Stevenson, a Minneapolis resident.

He said physical structures could send the wrong message to a community trying to heal.

"If the city really wanted to bring peace […] they would’ve taken concrete steps towards justice," Soren added. "There are multiple avenues they could’ve taken that they haven’t done yet and still can."

"If there are any fear of riots, you have to address what’s going on in the community," said Toshira Garraway, founder of Families Supporting Families Against Police Violence. "The root of that is pain that has been inflicted by law enforcement."