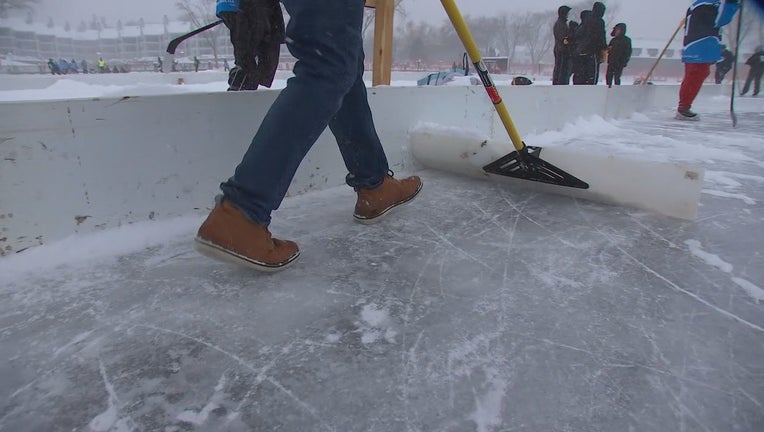 Shovel crews were hard at work to keep the ice clear during Friday's pond hockey tournament.

(FOX 9) - For most, Friday evening was a good time to stay inside and stay warm. But, the cold temps and snowy weather didn't stop some from enjoying the great outdoors.

On Lake Minnetonka, Mother Nature turned the ice-covered body of water into a winter wonderland for hockey players.

"I was like, 'this is the most Minnesota thing I've been a part of,'" said tournament organizer Jay Lindsay. "Feels like it's supposed to be."

Before each game at the North American Pond Hockey Championship, players had to trade their hockey sticks for shovels to make sure the ice is clear of snow.

"We went and bought 30 more shovels yesterday so there's tons of shovels," said Lindsay. "Everyone pitches in; it's faster to keep the ice clean just by shoveling."

With off and on snow showers expected until Saturday morning, tournament organizers say keeping the 14 rinks ready to play on isn't a battle they are going to win. But they say braving the elements is what outdoor hockey in Minnesota is all about.

"People were calling and texting what are you going to do," said Lindsay. "What do you mean what are we going to do? We're having a pond hockey tournament. This is it. This is how we roll."

While the snow fell on Friday, attendance was light across town at the grand opening of Ice Castles in New Brighton. Usually, they would welcome up to 2,000 visitors on opening night, but they only expect around 500 because of the snow.

"The best thing is the footing of the castle is snow so we don't have to worry about shoveling the inside of the castle," said manager Paige Faymoville.

Visitors who did make the snowy trek to check out the castles say they didn't mind the extra space.

"It's a little less crowded than I thought it was going to be, which is good because I'm not a fan of crowds," said Kendra Fanth. "I think it's ok. I think it's perfect."