A Chaska man is three years into his search for a new kidney, and has decided to take his search on the road.

CHASKA, Minn. (FOX 9) - A man from Chaska, Minnesota is taking his search for a kidney on the road, having bumper stickers made advertising his need for a Type O donor.

Randy Leuer was diagnosed with kidney failure 12 years ago. For the last three years, he’s been searching for someone willing to donate their kidney.

Leuer said the response hasn’t been great. He’s only heard from a handful of people, and none follow through.

Mallory Olson with the National Kidney Foundation says with a constant shortage of living donors, the organization hopes to ease the hesitation by ensuring it’s a low-risk procedure.

"Should you ever need a kidney one day, because you were a donor… you’ll be jumped to the top of the list," she said. 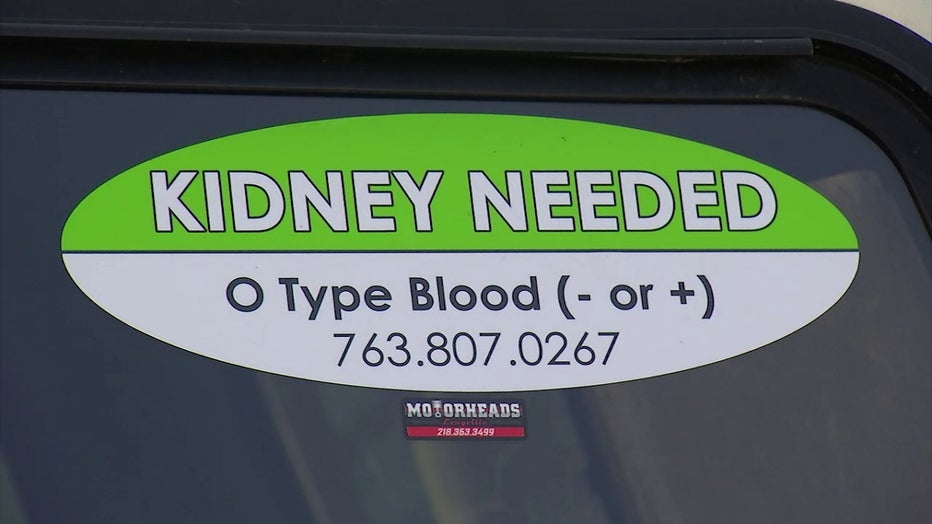 Leuer is using this bumper sticker to find a match. (FOX 9)

The organization also focuses on helping patients max out their network and reach as many potential donors as possible, hosting a bi-monthly event called "The Big Ask, the Big Give" for both potential donors and patients to learn more about how to connect.

"We educate people on how to tell their story in a way that connects with other people and teach how to amplify their story, use their network and share it with as many people as possible."

Last year, 97 patients died in Minnesota while waiting on a kidney. The number of people on the waitlist for a transplant is nearly quadruple the number who actually get one.

Leuer, who spends 10.5 hours a day hooked up to a dialysis machine, says a new kidney would change his life.