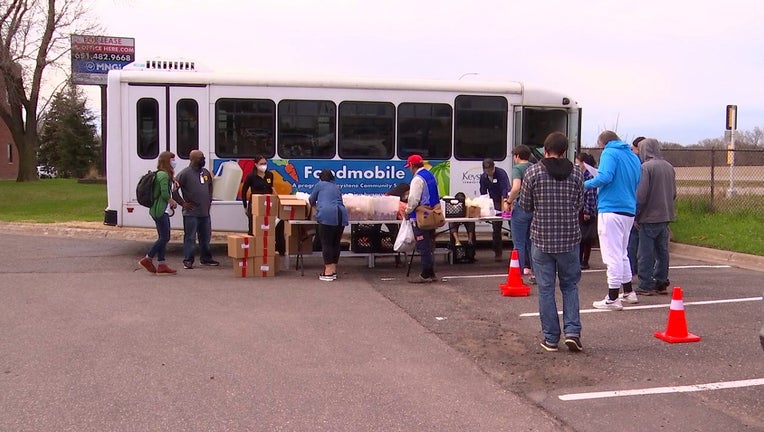 ST. PAUL, Minn. (FOX 9) - A nonprofit in St. Paul that brings food to people is taking a huge hit after a theft from its vehicles over the weekend.

Keystone Community Services announced the catalytic converters were stolen from both of its Foodmobile vehicles, which are food shelves on wheels.

A nonprofit in St. Paul that brings food to healthy people is taking a huge hit after a theft from its vehicles over the weekend. Keystone Community Services announced the catalytic converters were stolen from both of its Foodmobile vehicles, which are food shelves on wheels.

Keystone had to cancel all of its mobile distribution events this week at least, maybe longer depending on the supply chain to get these parts. President and CEO Mary McKeown said the cancellations mean more than 103 families, at least 230 people, won't be able to get food through Keystone’s mobile food service this week.

McKeown said the theft couldn't come at a worse time.

"Food costs have gone up, gas prices have gone up. And so we have more new people coming to our food shelves now than we ever have. So this is a terrible time to not be able to be bringing this important, vital basic need to people in the communities," she said.

Each month, Keystone brings the vehicles to 30 spots around St. Paul and Ramsey County, including senior housing and sites for people with disabilities. The nonprofit has had a mobile food program since 2015.

"We started it because we realized a lot of people can't get to our food shops that are on Rice Street and on University Avenue in St. Paul, and so we wanted to make sure that we could give food to people in the easiest way possible," McKeown said.

On Monday morning, a staff member discovered someone had stolen the catalytic converters off both Foodmobile vehicles over the weekend.

Keystone partners with another nonprofit, Midwest Special Services, Inc., and the vehicles were both parked behind locked gates at MSS’ facility. MSS is a nonprofit that provides services for people with disabilities in the Twin Cities, and catalytic converters were also stolen from MSS vehicles.

McKeown said it will cost at least $2,500 to replace the part on the smaller Foodmobile vehicle and even more for the larger vehicle.

"We have such a generous and supportive community that I know we'll get through this, but it's avoidable. It wasn't like somebody had a car accident. This is someone that purposely went and uninstalled these catalytic converters off the two vehicles that they know bring food out to the community. So just stop, stop doing it," she said.

Community members who are looking for ways to help can make a monetary donation to Keystone to help cover the cost of the catalytic converters. McKeown also encouraged everyone to donate to their local food shelves because they need help now more than ever. She expects more people to visit Keystone’s food shelves now that they canceled the mobile distribution events.

Here is a list of Keystone’s most needed items: