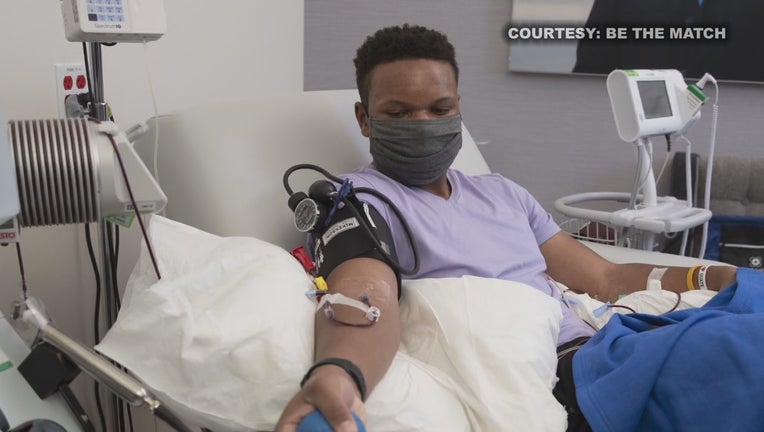 Joey Booker wants to get more Black Americans on the blood marrow donation registry. (Be the Match / Supplied)

(FOX 9) - One longtime Vikings supporter now has a big fan on the team, and it's all because he chose to become a donor and do his part to save another life.

"Minnesota is my home and the Vikings are my team," said bone marrow donor Joey Booker.

One longtime Vikings supporter now has a big fan on the team and it's all because he chose to become a donor and do his part to save another life.

Growing up in Minnesota, Joey Booker is a lifelong Vikings fan. But even though he now lives in Texas, he still has a connection with the team for helping to potentially save a life.

"The feeling is amazing where you get to have a hand in helping save a life when there were other avenues that didn't work," he said.

Booker signed up to be a bone marrow donor on the "Be the Match" registry after he drove by their headquarters and saw their logo on the building a few years ago. Earlier this year, he got the call he was a match for a patient battling cancer and donated his blood stem cells as a way to give back.

"I wanted to be on the registry because I have this desire to help people and you feel good when you help others," he said. "And for me, I wanted to donate portions of my body not just once I've passed away but also when I'm alive."

When he was finished, Booker got a Zoom call from Vikings fullback C.J. Ham who lost his mother to cancer less than a year ago. The two talked about the donation process and how important is to have African American donors on the registry because Black patients only have a 23 percent chance of finding a match compared to a 77 percent chance for their white counterparts.

"I might be the so-called celebrity on this call, but I wanted to talk to you because you are the real hero," said Ham.

Booker is a musician who once auditioned for American Idol and has performed at the state fair. He can't help singing the praises of being a donor and hopes other African Americans follow suit. "I just wanted to be an example of someone who is Black and went through the process and I'm ok," said Booker.