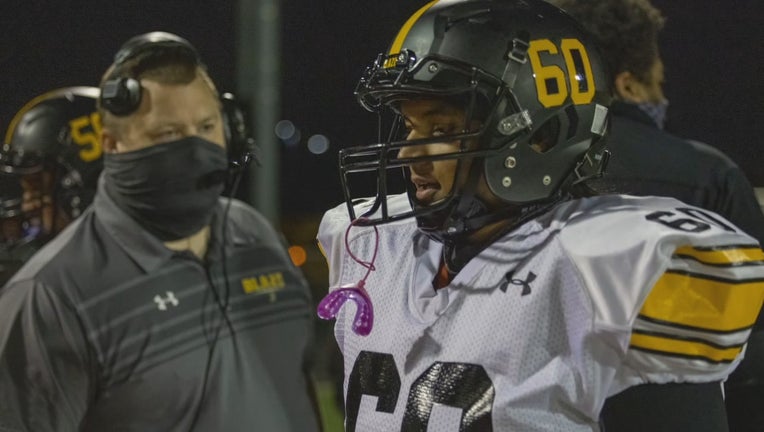 Alexis Bunnell is a senior on the Burnsville High School football team.

BURNSVILLE, Minn. (FOX 9) - As the Burnsville High School football team takes the field for its last regular season game Wednesday night, one of the players will be reflecting on her unique journey in the sport.

“When I started it was easier because I was bigger than the guys as they’ve gotten bigger I think people are surprised I’ve stuck with it,” said Alexis Bunnell, a Burnsville senior football player.

Burnsville football player reflects on her trailblazing journey to varsity

Alexis recalls back to 6th grade and first signing up to play tackle football after a year on the sidelines watching her twin brother play.

“The director jokingly said, ‘You should go out there and play with them,’ and it kinda turned from this joke to the real thing,” she said.

Overnight Alexis purchased pads and signed up, playing through middle and high school, moving up to varsity. She has played a variety of positions including linebacker, defensive line and most recently placeholder. Her twin brother Andrew does the kicking, while younger brother Cade plays on the B-team. Both can’t imagine playing without her.

“It’s normal to me,” said Andrew Bunnell, her twin brother. “Alexis is kinda like the trailblazer. And she’s setting the path and we hear it all the time, like ok we have a girl playing Burnsville. I’m kinda used to the reaction most people give now.”

Often, opposing teams don’t realize they’re facing off with a female football player until they're on the field. Mutual respect by her longtime teammates and coaches has made the entire program better.

“As a matter of fact, I had to check in with her during fall camp and say, ‘Hey is everything ok out here,’ because she took a couple of big hits. And she’s fine, never complained once,” said Vince Varpness, Burnsville head football coach.

Alexis says having fun keeps her craving those hits, but also becoming a role model feels as good as earning that extra point.

“If you really love something and you really want to do something - don’t let anyone tell you can’t,” she said. “Find a group of people who will support you and hang around them. Keep the haters away, I guess.”

After high school, Alexis and her twin brother will be going to the University of Minnesota together to study neuroscience. She says she's not ruling out the possibility of football playing some role in her future.