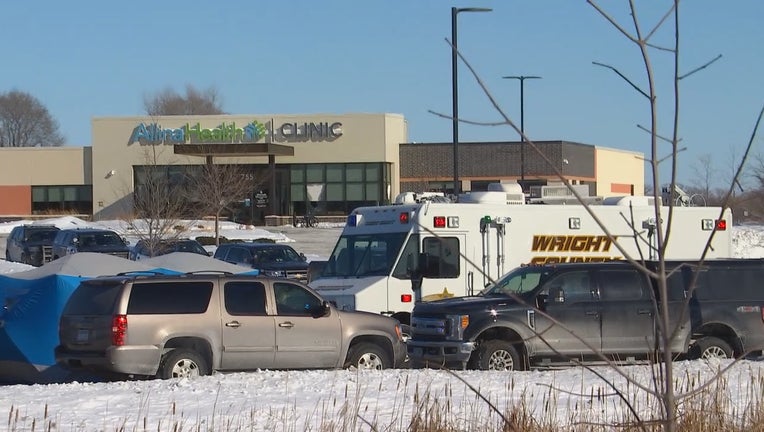 Authorities respond to a deadly shooting at the Allina Health clinic in Buffalo, Minnesota. (FOX 9)

BUFFALO, Minn. (FOX 9) - The Buffalo Allina Health clinic shooter told dispatchers where to find the victims he shot, what kind of injuries they had and where first responders could find his gun and bombs, newly released 911 calls detail.

FOX 9 has obtained transcripts of more than a dozen calls made to the Wright County 911 Center after Ulrich walked into the building and opened fire Feb. 9, 2021. Four people were injured and another died in the shooting for which Ulrich was charged with second-degree murder and four counts of attempted murder.

The Buffalo Allina Health clinic shooter told dispatchers where to find the victims he shot, what kind of injuries they had and where first responders could find his gun and bombs, newly released 911 calls detail.

One of the calls was made by Ulrich himself, in which he admitted to being the shooter and gave a description of himself to the dispatcher.

When asked to tell the dispatcher anything about the party that was shooting, Ulrich replied, "I am."

Ulrich also told the dispatcher that "a bomb or two is gonna go off."

Ulrich then tells the dispatcher to have police back away, saying, "I intend to surrender in a minute."

When asked where his weapon his, Ulrich tells the dispatcher that it is somewhere in the building. He then gives the 911 operator his name.

Chief Pat Budke, of the Buffalo Police Department, was emotional Tuesday as he updated the media on a mass shooting that occurred at an Allina Health clinic just before 11 a.m.

Ulrich then tells dispatch that five people were injured and tells her to initiate Life Flight.

When asked if anyone else is involved in the incident, Ulrich said, "You have to talk to my attorney."

Ulrich tells the dispatcher that three of his four bombs detonated, but that one more, located in his briefcase near the front desk, did not.

The dispatcher tells Ulrich that first responders would be making entry soon, at which time Ulrich says, "All right. Get to the women right away. And there’s bleeding in the back (unintelligible) area."

An unidentified female is heard on the call saying "Help. Please help. Help me. We’re bleeding."

The dispatcher disconnects the call at 11:05 a.m.

Court documents show additional encounters between law enforcement and the alleged suspect in the Allina Clinic shooting in Buffalo.

Fourteen total 911 calls were obtained in connection to this incident, including one from a woman who was with her 2-month-old daughter at the time of the shooting.

She described Ulrich as "an older guy" with a hat and wearing a longer brown jacket.

The woman says Ulrich walked up to the front of the clinic and said "You’re in trouble" before shooting. He also said "Get down," according to the woman’s call.