BROOKLYN CENTER, Minn. (FOX 9) - The pursuit of a murder suspect through Brooklyn Center led to a crash that left a total of six people - including a mother and her four children - injured Friday evening.

According to the Brooklyn Center Police Department, at approximately 4:20 p.m. officers received specific information about a male murder suspect with an active arrest warrant for murder being in Brooklyn Center.

Officers were able to locate the suspect in a vehicle, then requested help from the Minnesota State Patrol helicopter before attempting to use a tire-deflating device to prevent a possible pursuit during an arrest. However, the device failed to immobilize the suspect's vehicle and he fled, according to the statement. Police say at one point the vehicle reached 70 MPH in a 30 MPH zone. 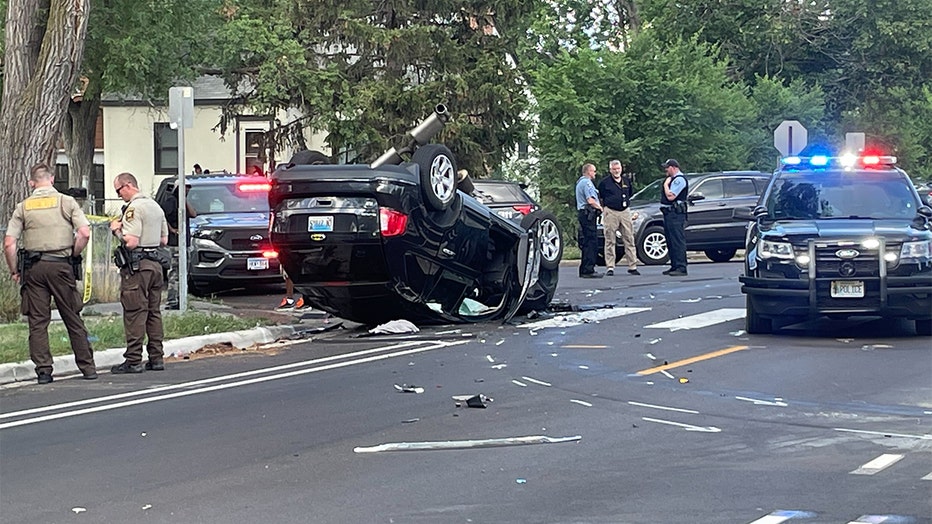 The vehicle then collided with an unrelated vehicle at 53rd Ave N and Humboldt Ave N. According to police, Brooklyn Center officers did not attempt to use a Pursuit Intervention Technique (PIT) to stop the fleeing vehicle.

Once the collision occurred officers rendered aid to the four occupants in the unrelated vehicle, and to the murder suspect, who was the sole occupant in the fleeing vehicle. All five were transported to area hospitals by ambulances.

There was at least one significant injury sustained, but at this time all individuals are in stable condition, according to the statement.

The murder suspect was arrested at the scene and is currently in police custody. The incident is being investigated by the Hennepin County Sheriff’s Office.