A bus-only lane is painted bright red in Minneapolis. (FOX 9)

It’s their solution to a problem they hope will be a big step in beating traffic.

The bright red bus lanes are designed to keep buses out of automobile traffic during rush hour.

The lanes are meant to keep busses from clogging things up, and they are hard to miss with their bright red color.

“There’s no mistaking where you cannot be during those times,” said Metro Transit’s Brian Funk.

Funk is the head of bus operations for Metro Transit and he says the Hennepin bus lanes worked well in a pilot project last year. 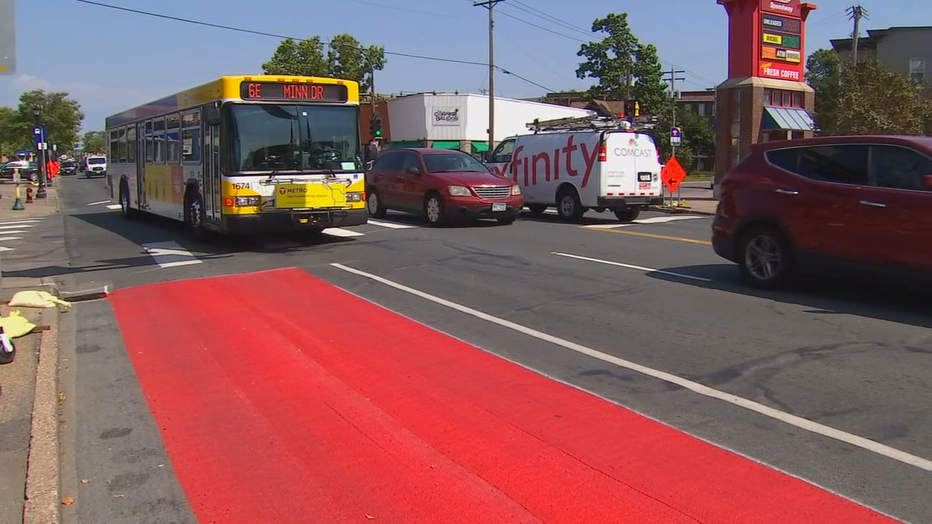 A Metro Transit bus maneuvers around the bus-only lane. Starting Friday, during select times, buses will have those bright red lanes to themselves while automobiles get the rest. (FOX 9)

He says they have no doubt in them as they kick them off as a permanent change Friday.

“This allows us, during those busiest times, to be in our own lane. Let us do our own thing, be over here on the right side in the curb lane. Now, it’s going to be automobiles only in those other two lanes,” he said.

The Hennepin Avenue bus lanes run for four blocks in each direction in Uptown, north and south of 25th Street.

The rest of the day, the area is used for parking.

So while drivers lose precious parking spots for those few hours, they’re also losing the congestion of busses in a stretch where they stop five times.

“In the case of Hennepin, the great news for other motorists is that you’re not competing for lane space with busses anymore,” Funk said.

A similar bus lane started on two blocks of Chicago Avenue over the Greenway a few weeks ago. Stretches of Lyndale and Nicollet Avenues are also in consideration.