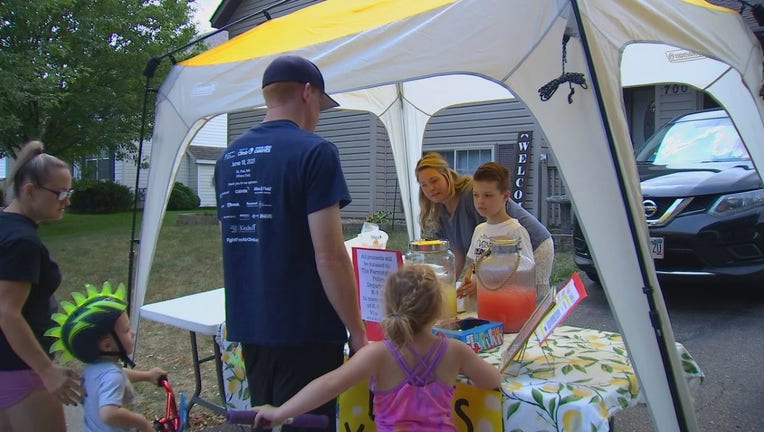 Ben's lemonade stand in Farmington is helping raise money for a K-9 in the Farmington Police Department.

FARMINGTON, Minn. (FOX 9) - Over the last couple of weekends in the Twin Cities south metro, a lemonade stand has had so many people stopping by, it’s bringing a small town together.

At seven years old, Benjamin has a bright future ahead in Farmington. For now, the budding entrepreneur says the money is in lemonade, and he has his town lining up this summer at Ben’s Yummy Yum Lemonade Stand.

A 7-year-old boy's lemonade stand is helping to take care of a K-9 in Farmington, Minnesota.

Ben's mother, Amy Schiemer, said they've been busy for the past two weekends.

"We had to put strawberries in and put the juice in," added Ben.

The soon-to-be second grader has autism and was looking for a way to earn some money and experience this summer.

"We are just navigating life with that," Amy Schiemer said. "It’s different."

"City council members would stop by and take selfies with him," added neighbor Jenna Anderson. "It was pretty busy on the corner here."

Ben’s Yummy Yum Lemonade Stand left an especially sweet taste, but the boy isn’t taking his money to the mall or the water park. Instead, he’s bringing it to the Farmington Police Department.

"This certainly helps. We just got a new K-9, so that put a pretty big dent in our K-9 fund," Farmington Police Chief Gary Rutherford said.

Ben said he wants to use the money he raised to help take care of the department’s new four-legged officer.

"They actually wanted to match donations because he ended his first weekend at $425," Amy Schiemer said.

"I was honored by that, but more than that I’m proud of Ben, and I’m proud of his family and proud of the city, the way they supported his lemonade stand," Rutherford added.