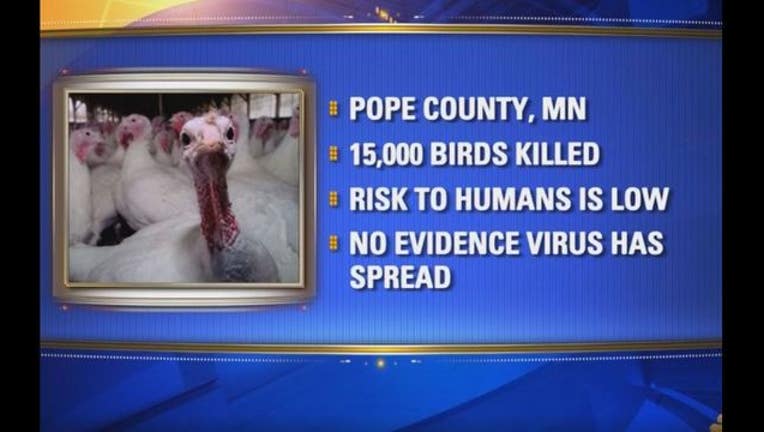 A strain of influenza that's affected backyard and wild birds in Washington, Oregon and Idaho has now been confirmed in western Minnesota. The United States Department of Agriculture (USDA) has confirmed the presence of H5N2 avian influenza in a commercial turkey flock in Pope County.

Friday, officials began contacting those with backyard flocks in the area surrounding the affected turkey flock. Poultry in the area will be placed under quarantine and will be tested for influenza.

The unidentified farm has 4 different barns, birds in only one of those barns tested positive for the H5N2 strain. Remaining birds will be euthanized over the weekend because they have been exposed to the virus.

Bird flu spreads quickly by direct bird-to-bird contact and indirectly when birds come in contact with contaminated surfaces or materials.

With Minnesota being the largest turkey producer, the sickness isn't good for business. More than 40 countries have banned poultry imports from Minnesota after the strain has killed 15,000 birds within a week.

Officials said no human infections have been detected and the risk to the public is very low. The USDA confirmed influenza in poultry is not a food safety concern.