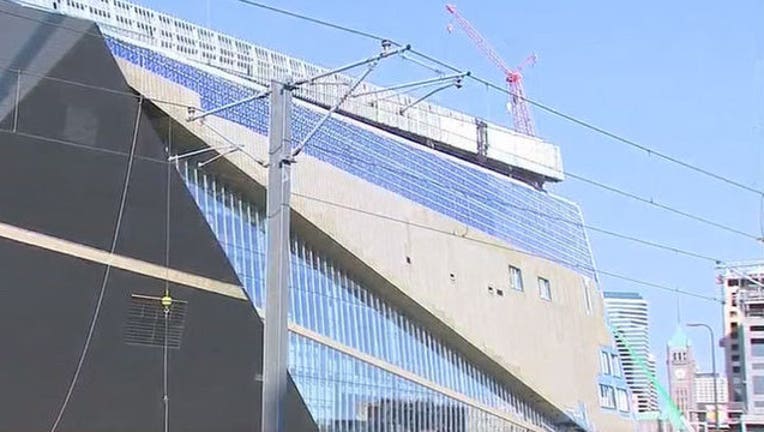 Minneapolis firefighters work to rescue a pair of construction workers injured in a fall at US Bank Stadium. Photo by Steve Strom / Fox 9.

MINNEAPOLIS (KMSP) - Loved ones and colleges from Berwald Roofing will attend the funeral of 35-year-old Jeramie Gruber on Monday. Gruber was working on the roof of the new Vikings stadium last week when he fell 50 feet off the edge.

Minnesota OSHA officials said its investigation can last anywhere from 2 to 6 months, but any findings and potential citations cannot be released until an appeals process after that investigation wraps.

Berwald Roofing shut down its entire operation today so that all employees and colleagues could attend the funeral. Berwald is currently working on about 20 projects across the region, including U.S. Bank Stadium. They are expected to be back up on the roof on Tuesday after several days away from the work site.

Mortenson Construction senior vice president John Wood said the two workers with Berwald Roofing, a subcontractor, were doing roof work on the north side of U.S. Bank Stadium at about 7:45 a.m. on Wednesday. Wood told reporters at a news conference that the worker who died fell 50 feet off the edge of the roof on the north side of the stadium and landed in a snow gutter. He was pronounced dead upon arrival Hennepin County Medical Center.

View photos of the rescue scene at http://www.fox9.com/sports/vikings/12095596-gallery

Mortenson said they could not confirm if the workers were wearing harnesses.