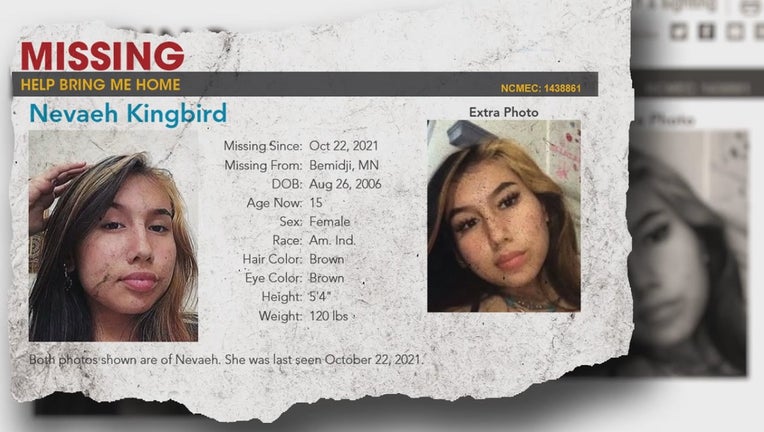 Nevaeh Kingbird has been missing since October 2021.

BEMIDJI, Minn. (FOX 9) - The Bemidji Police Department released several new images in hopes of stirring up leads to locate 15-year-old Nevaeh Kingbird, who has been missing since October.

Bemidji PD has conducted several high intensity searches in conjunction with several other state and tribal agencies, the department said Friday. However, the teenager has not been located.

The FOX 9 Investigators highlighted Nevaeh’s case, following the family as it led a series of searches without direct help from law enforcement.

"I won’t give up. I will look for her until my last breath," said Nevaeh’s mother Teddi Wind. "I just wish that nobody else ever had to feel this way – I miss my daughter so much."

Bemidji police say they received information that Nevaeh may have been wearing a red sweatshirt with a logo bearing a bull. However, authorities say it’s possible the teen was wearing a black zip-up hoodie, blue skinny jeans, a white shirt, and black and red Nike sandals.

If you have any information or have seen any of the clothing article above to please contact the Bemidji Police Department directly at 218-333-9111.  Anonymous tips can be made to Crime Stoppers of Minnesota at www.CrimeStoppersMn.org, by calling the toll-free phone number 1-800-222-TIPS [8477]; or by using the P3 Tip Submit app installable on all smartphones.