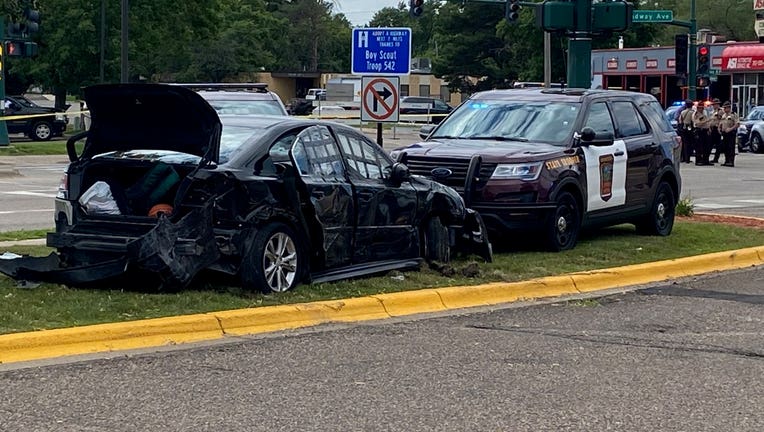 CRYSTAL, Minn. (FOX 9) - Three suspects were taken into custody on Thursday after an incident in Crystal, Minnesota where a police officer was hit by a vehicle during a chase.

According to the Minnesota Bureau of Criminal Apprehension, which is investigating the incident, the chase started around 1 p.m. when a state patrol trooper attempted to stop a vehicle on I-694 near Highway 169. The vehicle didn't pull over, investigators say, and troopers started a pursuit.

The pursuit moved into Crystal, Minnesota where troopers were able to box the driver in at 57th Avenue North and West Broadway Avenue.

According to the BCA, as troopers tried to take the driver into custody, the driver attempted to take off again. At that point, the BCA says the driver ran over a Crystal police officer and damaged several police squads.

The officer was taken to the hospital with injuries but is expected to be okay.

During the attempted getaway, the BCA says another officer fired at the vehicle. However, it's unclear if the round hit anyone. One of the suspects was treated for what investigators call superficial injuries suffered during the chase. It's unclear how they were hurt.

Three people who were in the vehicle were taken into custody and have been booked into Hennepin County Jail.

The officer who fired his gun has been placed on administrative leave.

The investigation into the incident is ongoing, the BCA says.