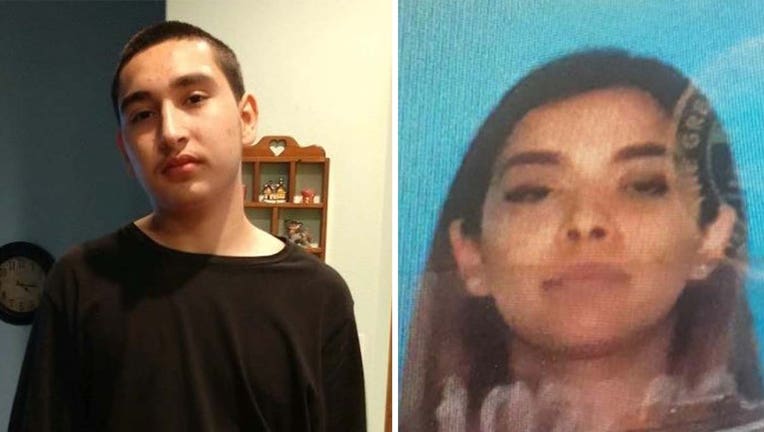 LAFAYETTE, Minn. (FOX 9) - The Minnesota Bureau of Criminal Apprehension says the missing runaway teen and two young kids who were travelling with a woman, who is accused of having a baby with the teen, were found safe in the state of Wyoming.

Julianna Gutierrez, 28, is facing ten felony charges in connection to criminal sexual conduct and depriving another of custodial or parental rights, according to charges filed Monday. The BCA said she is "currently on supervised release" for first-degree criminal sexual assault conduct, but around 6:30 p.m. on Friday, authorities asked for the public's help to locate her whereabouts. The missing person alert was canceled around 10:15 p.m. Friday.

Under a protection order in place, Gutierrez has been ordered to have no contact with 15-year-old Brian Ballardo, according to the BCA. Gutierrez and Ballardo told law enforcement they were a couple, the charges state.

Ballardo, along with a two-year-old and one-month-old, were traveling with Gutierrez in a white 2011 Hyundai Sonata with California license plate 6MTU971. The Nicollet County Sheriff's Office said Gutierrez and the three children have been located safe in the state of Wyoming Friday night.

According to the charges, Ballardo's mother reported the 15-year-old teen missing from California on November 23 of last year and that he may be with Gutierrez. Nicollet County law enforcement received multiple tips on November 9 about Ballardo and how he may be living with Gutierrez and may be the father of a newborn.

Investigators then determined that Gutierrez may be living in Nicollet County after her vehicle was stopped in the area twice. In September, a man who identified himself as "Juan Gutierrez" was driving her car when it was stopped in Sibley County. Law enforcement believed "Juan Gutierrez" was a fake name and later determined it was Ballardo. On November 4, she was stopped while driving her car in Lafayette. Ballardo was in the passenger seat, as well as two small children in car seats in the back.

Law enforcement conducted a search warrant at Gutierrez's Lafayette, Minnesota address on November 11. Officers found the defendant, the missing teen, a two-year-old and and a two-week-old child in the one-bedroom apartment. According to the BCA, Gutierrez has no legal custody of both children.

The charges state that Ballardo told law enforcement that the two-week-old was his child, and it wasn't possible for anyone else to be the father since he and Gutierrez had been together for longer than ten months. Gutierrez told law enforcement she had known him for years and they "had recently become boyfriend and girlfriend." She also said they traveled to Minnesota about four to five months prior.

Gutierrez's next virtual court appearance is scheduled for 10:15 a.m. Tuesday, November 30. If she does not appear for the court hearing, she could face additional criminal charges.

The BCA said Gutierrez and Ballardo are both from California, and Gutierrez has connections in Las Vegas, Nevada.