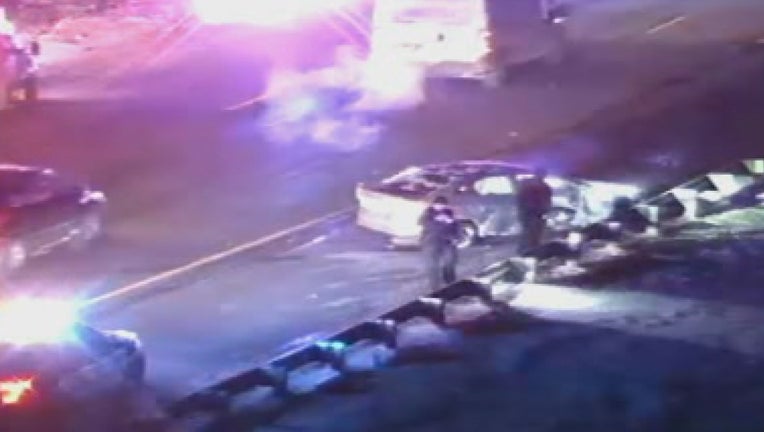 Authorities are investigating whether a crash Wednesday night may be linked to a body that was found the following day in a nearby median.

SHAKOPEE, Minn. (FOX 9) - Many questions remain about the body found in the center median of Highway 169 at Canterbury Road in Shakopee Thursday afternoon. The Minnesota Bureau of Criminal Apprehension has confirmed it is investigating whether the victim was involved in a two-car crash about 15 hours earlier in that same general area.

Fox 9 has obtained the Minnesota Department of Transportation traffic camera video of the crash, which happened Wednesday night at about 10:35 p.m.

Many questions remain about the body found in the center median of Highway 169 at Canterbury Road in Shakopee Thursday afternoon.

A Hyundai Elantra veered left and crashed into the center median, coming to rest in the left lane of northbound 169. Moments later, the driver of a Saturn Ion strikes the Elantra that then ends up on the right shoulder.

“It looked like a pretty bad accident,” said Kellogg. “The vehicle against the median was pretty banged up, perpendicular to the highway.”

Despite the dark, late night conditions, the MnDOT cameras captured what appears to be the motorists moving around.

However, when law enforcement eventually responded to the scene, the State Patrol reports they couldn’t find the driver of the Elantra. Sources have said it was believed they fled. Authorities went searching for the missing motorist and visited several local businesses, asking employees if they had seen anyone from the crash scene

The head of State Patrol, Colonel Matt Langer, was not commenting on the incident Friday.

“I am aware of it,” said State Patrol Colonel Matt Langer. “I've been briefed on it, and it is under investigation.”

At this point, it’s unclear how far away the body was found from where the crash happened.