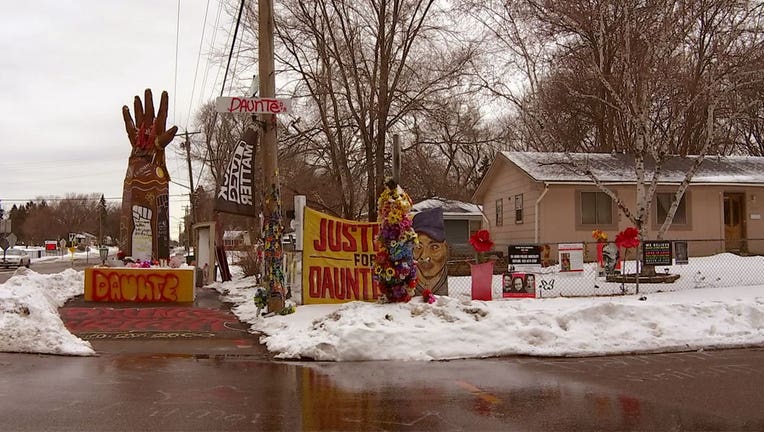 The memorial for Daunte Wright in Brooklyn Center will remain after a meeting with the Wright family and city officials on Tuesday. (FOX 9)

BROOKLYN CENTER, Minn. (FOX 9) - Brooklyn Center has agreed to stop plans to remove a memorial erected to honor Daunte Wright, the man shot and killed by former officer Kim Potter last year, after a meeting with Wright's family, according to the family's attorneys.

Katie Wright, Daunte's mother, raised concerns about the removal this week after getting contacted by Brooklyn Center City Manager Reggie Edwards. In an email posted to the Daunte Wright Memorial Instagram, Edwards notified memorial organizers that the city was looking to reopen the sidewalk and trail at 63rd Avenue North and Kathrene Drive, the site of Daunte Wright's killing. Edwards gauged the group on how they wanted to proceed with the removal of the memorial this week, promising to preserve items and create a permanent memorial for Daunte.

"Today, representatives from Brooklyn Center met with Katie Wright and representatives for the Wright family regarding the preservation of Daunte Wright’s memorial. The meeting was very positive. The city committed to maintaining Daunte’s memorial in its current location. The city and the family will work cooperatively with civil engineers, artists, and community members to construct a permanent memorial at that location. The current memorial will continue to exist as is until permanent plans are finalized. The family is encouraged by the city’s commitment to preserving Daunte’s legacy and this tragic and important piece of history, which means so much to Daunte’s family and so many more. The family is indebted to those supporters who have continued to visit and maintain the memorial and fight for its continued existence."

April 11 will mark one year to the day of Wright's fatal shooting at the hands of Kim Potter. Potter was sentenced last month to two years behind bars for the shooting.