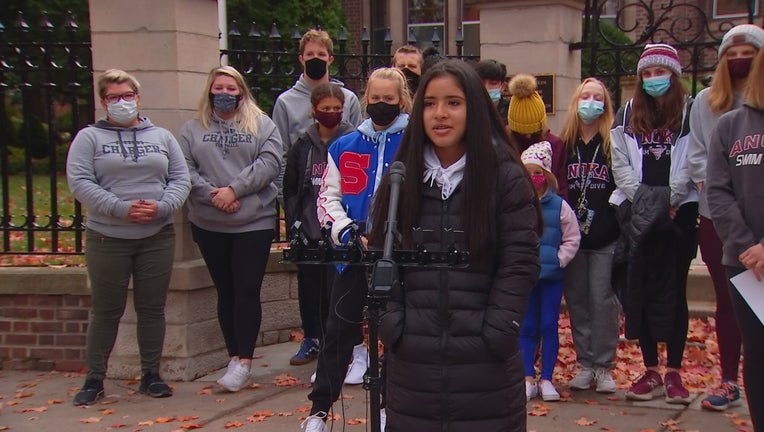 Students brought a letter to the governor on Saturday in St. Paul. (FOX 9)

ST. PAUL, Minn. (FOX 9) - Students and parents are continuing to push the Minnesota State High School League -- and now the governor -- to loosen some restrictions on high school sports.

Right now, some fall sports have started but there will be no end of season tournament for athletes.

Students and parents are continuing to push the Minnesota State High School League -- and now the governor -- to loosen some restrictions on high school sports.

Most Minnesota schools have started their football, soccer, volleyball, and swimming seasons. But, right now, all of these students are playing with no end of season tournament in sight. Saturday, some of those students are asking for the governor to step in and make a postseason happen.

"We don't need fans," said Hill Murry High School soccer player. "I just feel like it’s for the players to have a chance to play at state."

Players and parents delivered a letter to the governor's residence, asking Walz to step in and reverse the Minnesota State High School League’s decision to cancel all state tournaments this fall.

"We’ve had safe meets all year and we just want Governor Walz help to have one more meet," said Anoka swimmer Reese Dehen.

Dehen explains the state tournament is about more than naming a champion. Often times, it can mean the difference for students looking to play at the next level.

"If you get a better time that can lead to more open doors for colleges, if that’s D-3, D-2 or D-1 level," she explained. "It doesn’t matter. One more swim, that can be the difference between being able to swim in college and not being able to swim at all."

Other students say the lack of a postseason is hard on student's morale during a time when they’re already dealing with a challenging school year.

"Football for many kids it's their favorite sport and it's what keeps them interested in school," said Fairmont High School football player Hudson Artz. "It’s not just a game to some kids. It’s huge for college opportunities, scholarships."

"These sports know how to be safe," added Simley Senior High School tennis player Clara Thoemke. "There have been mask regulations whether you go to a meet match or game."

The governor is responding to this letter with a statement sent to us from his office that reads: “As a former high school teacher and coach, Governor Walz is thrilled to see students making their voices heard. He appreciates their position and understands how difficult this school year is due to COVID-19. The Minnesota Departments of Health and Education are committed to working in consultation with the Minnesota State High School League to find ways for students to safely participate in extracurricular actives.”

The next state high school league board of directors meeting is scheduled for December 3.