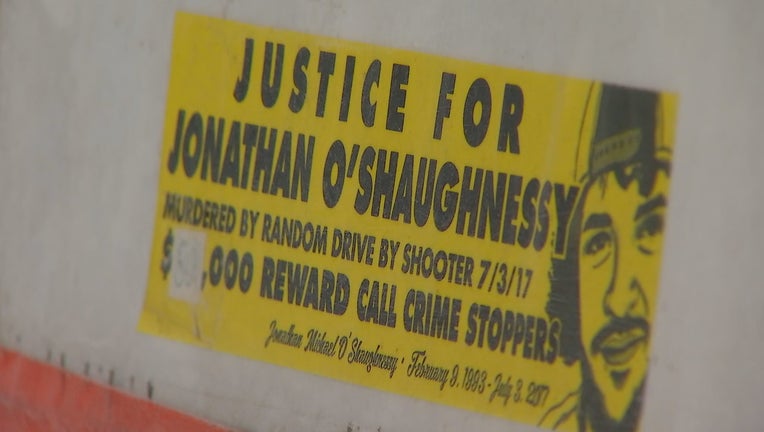 Jonathan O'Shaughnessy's death remains unsolved in Richfield. But his family says they won't give up searching for answers. (FOX 9)

RICHFIELD, Minn. (FOX 9) - This year marks four years since a 24-year-old Richfield man was shot and killed walking home from a July 4 celebration.

While the family of Jonathan O’Shaughnessy says there are still no solid leads in the case, they’re not giving up hope. And as they wait, they’re giving back in memory of their son.

A family continues to give back to honor the life of their son, as his murder remains unsolved.

Saturday, the family turned their attention to helping an animal rescue group in Hastings, Minnesota. It was an afternoon filled with lots of dogs very happy to see their guests who stopped in Hastings to drop off several carloads of donations to "Emotional Rescue."

"Jonathan’s birthday was February 9th, so we collected every year from January 9 to February 9... this was dog supplies only," explained Jonathan's mother Cynthia Kuntz with Justice for Jonathan.

It's a family dealing with their own grief but wanting to give back the way their son would’ve wanted.

"We really enjoyed it, and it was in honor of Jonathan because he really loved his animals," said Kuntz.

Jonathan's mother Cynthia says she does these community events to give back, but it's also about making sure that what happened to her son in Richfield is not forgotten.

"Everybody loved his bear hugs; you saw him coming with a big smile and you knew a hug was coming, too," said Kuntz.

The 24-year-old was walking home in Richfield with family on July 3, 2017, after the city’s annual Fourth of July Street dance when he was shot and killed in a drive-by shooting on 64th Street near Fourth Avenue South. Those responsible have never been caught.

Cynthia focuses her energy on making sure Jonathan’s case gets solved and finding new ways to help others on a monthly basis.

"I do like doing them for him, and it’s an honor to be doing it for him and to keep his name in the public and to help the community," she said.

Always hoping Jonathan’s name, photo, or even the scene might spark some kind of memory.

"Somebody knows who did it so maybe eventually they’ll say something," said Kuntz.