MINNEAPOLIS (FOX 9) - Update: The Hennepin County Attorney’s Office has decided not to appeal the case of two men awaiting trial, relieving a backlog of 41 defendants in jail awaiting trial.

The world is watching the trial of former Minneapolis Police officer Derek Chauvin, but 41 other defendants are waiting in the Hennepin County jail to begin their trials, including a trial set to start Tuesday.

In a ruling from the bench Monday morning, Judge Kerry Meyer said the trials of two defendants should continue as scheduled. That ruling was stayed while prosecutors have until noon Wednesday to consider an appeal.

The world is watching the trial of former Minneapolis Police officer Derek Chauvin, but 41 other defendants are waiting in the Hennepin County jail to begin their trials, including a trial set to start Tuesday.

During the Chauvin trial, public access to the Hennepin County Government Center has been restricted. The Chauvin trial is using one of four large courtrooms that can accommodate social distancing with limited seating.

Prosecutors filed motions to delay both trials until they could be conducted without what they describe as onerous security and pandemic restrictions that limit public attendance, denying a defendant their 6th Amendment right to a public trial. 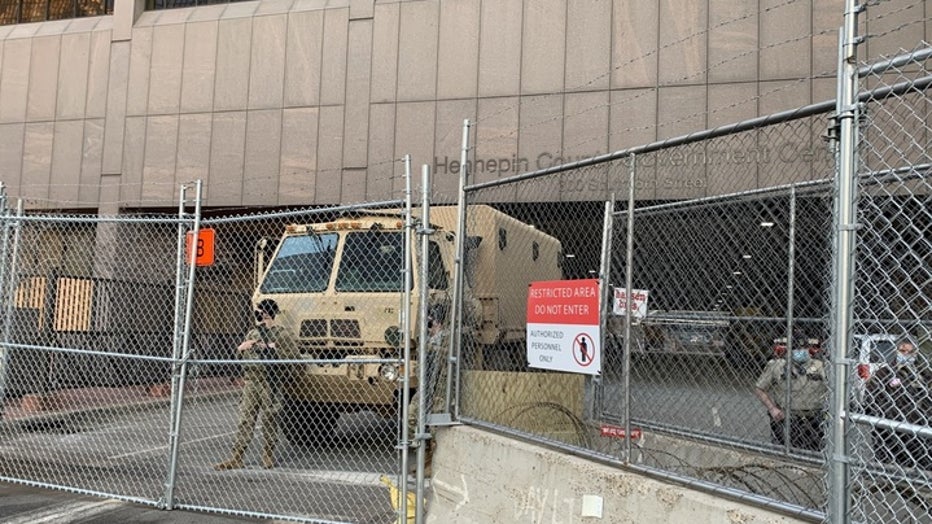 Extra security is in place at the Hennepin County Government Center as jury selection for the Derek Chauvin trial. (FOX 9)

But, during a hearing Tuesday morning, defense attorneys questioned whether it was fair for two Black defendants to stay in custody awaiting trial, as a white police officer has his day in court while remaining free on bail.

The trial of Derelle Todd was scheduled to begin Tuesday. Todd is charged with second-degree murder in the killing of Miguel Viveros Morales, 28, last October in north Minneapolis.

Arnold Cole is charged with attempted second-degree murder stemming from a stabbing at a Bloomington light rail station in September. His trial was scheduled to begin Monday.

Hennepin County Senior Assistant Attorney Stuart Shapiro argued that if the trials were to continue, both defendants would have a ready-made appeal that the trials were not public. In fact, he said, they would use the state’s brief as part of their argument.

"We all know if they’re convicted they will be raising this on appeal," said Shapiro. "And why wouldn’t they?"

"The defendants would argue that Derek Chauvin got a public trial, but I got the scraps of a public trial. Are his rights more important than mine?" Shapiro asked rhetorically.

Prosecutors want the court to make the courtroom available to the general public, or wait until the Chauvin trial is over, which would push all the pending cases back until possibly May.

But, defense attorneys said their clients are entitled to a speedy trial.

Defense attorney Emmett Donnelly said he found it troubling "the trial of an out of custody white man who was fortunate to post a $2 million bond on his murder trial would take priority over the trials of Black men who could not afford those bails and have demanded a speedy trial."

Chauvin's bail was $1 million with conditions.

Judge Meyer said the three other courtrooms available have six seats each for the defense and the prosecution that could be used by family, the press and members of the public. If those seats are full, spectators could also view the proceedings remotely from two large overflow rooms at the Family Justice Center located four blocks from the Hennepin County Government Center.

In a previous order denying the prosecution’s motion for continuance, Meyer wrote that, "All jury trials in session other than State v. Chauvin will be posted at the public pedestrian gate."

When a FOX 9 producer checked the gate this morning there was no such posting, despite the trial set for Tuesday. Security guards told the producer nothing has been posted and they ran out of flyers directing the public to the overflow courtrooms.