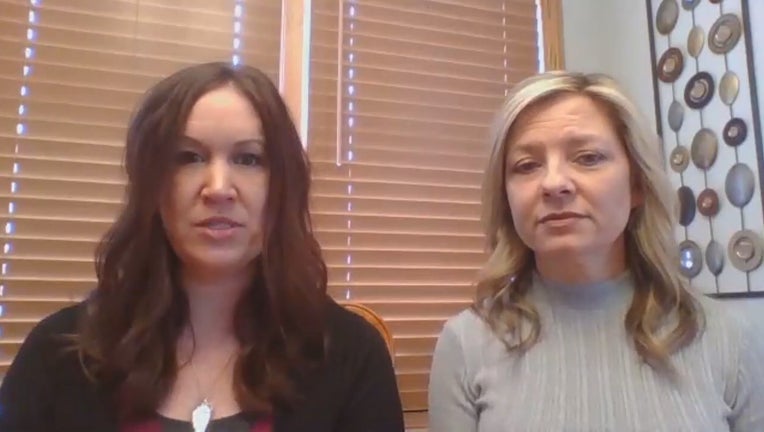 Mothers Janet Casperson and Shannon Lee both share the pain of losing children in 2020. (FOX 9)

BLAINE, Minn. (FOX 9) - After each of them suffered a loss in 2020, two mothers from Blaine, Minnesota are putting a focus on mental health for kids during the pandemic.

"I can’t describe it unless you’ve gone through it, what it’s like to lose a child," said Janet Casperson.

After each of them suffered a loss in 2020, two mothers from Blaine, Minnesota are putting a focus on mental health for kids during the pandemic.

Mothers Janet Casperson and Shannon Lee share the unimaginable pain and heartbreak of losing children in 2020.

On Saturday, Janet will mark exactly one year since saying goodbye to Sam with what she is calling a virtual candle-lighting "Angelversary."

As the calendar flips but pandemic restrictions continue, the grieving mothers want to bring attention to the delicate state of mental health among teens.

"I don’t think it’s being addressed at all right now," said Janet.

Together, they worry about the impact of social isolation, distance learning, and a shutdown of sports and extracurricular activities and what it might mean for the well-being of developing, young adults -- including the 15 year olds both are raising at home right now.

One area of focus, particularly for Shannon, when it comes to teenage mental health is social media.

"Kids don’t realize your words and actions, both good and bad have such a profound impact on people," said Shannon. "They just don’t see that behind the screen."

Shannon says Ashlyn was badly bullied online before her death last February. The pair of moms have since become great friends and advocates and recently accepted a Capitol invitation to advocate for some proposed legislation in Saint Paul.

They are vowing to use their voices and experiences to save other young lives.

"This is such a difficult time in the world right now," said Janet. "There are kids struggling big time mentally, not being in sports or being in school with friends. Just keep checking in with them."