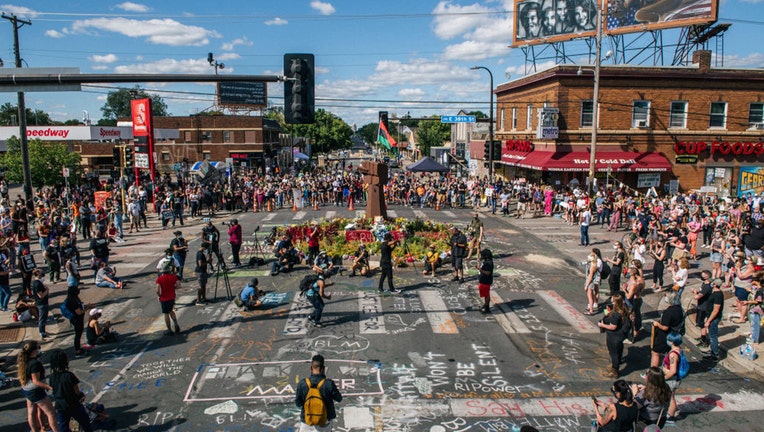 People participate in a demonstration on August 17, 2020 in Minneapolis, Minnesota. Community members came together for a rally to protest the city's potential forceful reopening 38th Street and Chicago Ave, an unofficial autonomous zone known as Geo

(FOX 9) - The Minnesota Department of Public Safety and State Patrol have settled a lawsuit filed on behalf of media members that will result in a settlement, as well as, additional training and policy changes.

The American Civil Liberties Union (ACLU) sued several agencies on behalf of the Communication Workers of America and a number of individually named freelance journalists, alleging mistreatment of media during the civil unrest and riots following George Floyd’s and Daunte Wright’s deaths.

"The ability of journalists to cover civil unrest in our communities must be protected and encouraged," Department of Public Safety Commissioner John Harrington said in a statement. "The hallmarks of this agreement are transparency, accountability and excellence in policing."

According to an announcement, the agreement includes additional training for state troopers, both Department of Public Safety and State Trooper policy changes, and a payment of $825,000 to the ACLU for attorneys’ fees. In addition, the Department of Public Safety will pay for an independent external review of all internal affairs cases related to alleged State Patrol mistreatment of media in May 2020 and April 2021.

The court issued a preliminary order on October 28, 2021, which defined journalists and exempted them from law enforcement orders to leave an area. It also prohibited the State Patrol from arresting, threatening to arrest, or using physical force against any person they reasonably should know is a journalist (unless there was probable cause of a crime separate from failing to abide by law enforcement orders to leave an area).

The litigation included the City of Minneapolis, (then) Minneapolis Police Chief Arradondo and Hennepin County Sheriff Dave Hutchinson, who recently announced he will not seek reelection.

"The unprecedented civil unrest and riots of the last two years were difficult for all involved, including media and law enforcement," said Colonel Matt Langer, chief of the State Patrol, in a statement. "We learn from incidents like these and look for ways to make us better."