A Million Dollar Secret: Is the Piper kidnapping ransom buried in Willow River?&nbsp;

Nearly 50 years later, it remains one of Minnesota’s greatest unsolved crimes: Who kidnapped Virginia Piper? And where is the million-dollar ransom?

WILLOW RIVER, Minn. (FOX 9) - Nearly 50 years later, it remains one of Minnesota’s greatest unsolved crimes: Who kidnapped Virginia Piper? And where is the million-dollar ransom?

Virginia Piper, the wife of investment banker Harry Piper, was kidnapped July 27, 1972, from the garden of her Orono home, by two men wearing ski masks, each man carrying two guns.

Harry Piper would personally deliver the ransom money, one million dollars in $20 bills, to the back alley of a Minneapolis bar. Virginia Piper was found two days later in Jay Cooke State Park near Duluth, handcuffed and chained to a tree.

Two men, Don Larson and Ken Callahan, were convicted for her kidnapping in 1977, but the verdict was overturned on appeal. They were acquitted in a second trial.

The $1 million was never recovered.

Could the money be buried in Pine County? 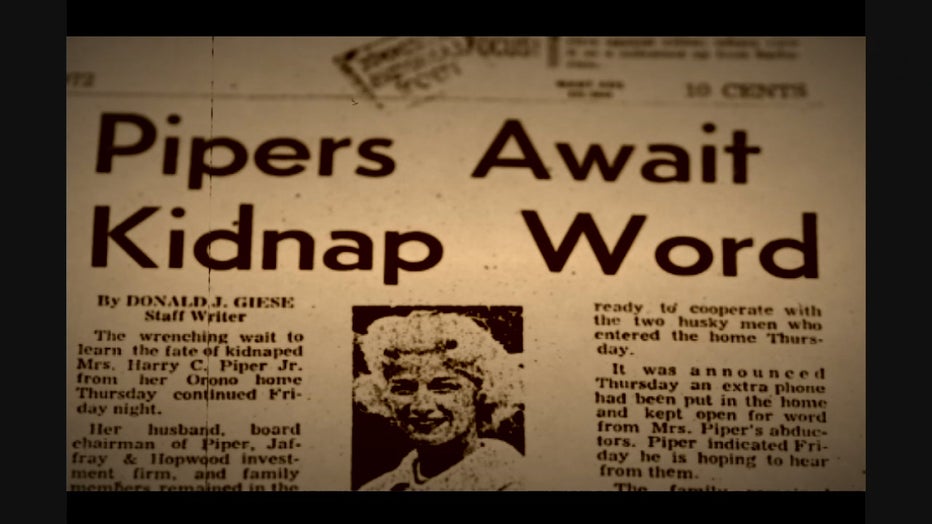 After her kidnapping in 1972, Virginia Piper made it back home. But, nearly 50 years later, a mystery still remains. (FOX 9)

"Here comes the hook," said Pine County Attorney Reese Frederickson, who was providing a "dark history tour" to an audience at the Pine County History Museum in Askov.

"There’s always been a rumor that some or all the money is in Willow River, if you believe Don Larson perpetrated the crime," Frederickson said.

The theory took on new life recently when the city clerk offered Frederickson, a local history buff, boxes of old homicide files that were destined for the shredder.

"What are the names on the file?" Frederickson recalled asking. There was one particular case he had an interest in, a mass murder in Willow River, and the clerk had found it. Frederickson shared the evidence with the FOX 9 Investigators.

On April 24, 1976, four years after the Piper kidnapping, Donald Larson shot and killed five people - his wife Ruth, his best friend Jim Falch, and three children, including Larson’s own five-year-old son. Larson, an unemployed truck driver from South Minneapolis, had moved to Willow River in 1973.  He had yet to be publicly identified as a suspect in the Piper kidnapping.

"You don’t forget a case like that," said Olson, who revisited the crime scene, a farm several miles outside Willow River, with the FOX 9 Investigators.

Olson said there was an eerie silence when he arrived on the crime scene. He discovered Larson’s wife inside the home, with her dead five-year-old child wrapped around her legs, still holding a pack of Juicy Fruit gum.

In a garage, he found a man still alive. It was Jim Falch, Larson’s best friend, who had recently been caught having an affair with Larson’s wife, Ruth. Another deputy grabbed a tape recorder, and they took a statement from the dying man.

Larson had apparently come home to find his wife moving out, his best friend stealing some of his tools, and lost it. Three other children escaped when Larson ran out of ammunition.

"To argue with his wife, you won’t need 50 extra rounds," Olson said.

His suspicions were confirmed the next morning, when he noticed a black sedan pulling up at the end of the driveway to the crime scene. It was two FBI agents from the Twin Cities.

"I asked him what’s the FBI doing here, and he said, 'this is one of our chief suspects in the Virginia Piper kidnapping,'" Olson recalled.

The FBI agents told him they had been there last week asking Ruth Larson if she was willing to talk to them again about the Piper kidnapping. She had been Larson’s alibi four years earlier. Ruth Larson had told the FBI she had a change of heart, and had information for them, but she needed to wait until she moved out of their home. Only then, would she talk.

"I asked if anyone else was present when the conversation took place and the FBI said yes, the 5-year-old son," said Olson.

Larson had picked up his son a couple of days earlier, and Olson believes the child told his father that, "Mom was going to talk to the FBI."

Detectives also learned Larson had told a former boss that he buried some money in his yard in Willow River and put a rock on top of it. But, Larson said the money had disappeared, and he suspected his wife’s boyfriend stole it. Larson had told others he thought Jim Falch was an FBI informant.

The FBI got a search warrant and began digging up the 80-acre property in Willow River, looking for the million dollars in ransom money but found nothing. After the killings, Larson fled back to Minneapolis where police arrested him three days later at the since-demolished Fair Oaks Motor Hotel. A maid had discovered Larson passed out on the floor from pills and vodka and had called police.

Larson was convicted for the murders and sentenced to life in prison.

His connection to the Piper kidnappings became public a few months later, when 14 days before the statute of limitations was set to expire, a federal grand jury indicted Larson and his friend Ken Callahan for the Piper kidnapping. The only physical evidence was a questionable, partial fingerprint of Larson’s found on a grocery bag in a green Monte Carlo used to kidnap Piper, and a strand of human hair ‘microscopically identical’ to Callahan. This was before DNA testing.

Both men were found guilty in the first trial.

But a U.S. Appeals Court overturned the conviction because a defense witness wasn’t allowed to testify. Larson and Callahan were acquitted in a second trial. It mattered little for Larson who was already doing life in prison for the Willow River murders.

For the FBI, even without a conviction, the Piper case was closed. But were Larson and Callahan really the kidnappers? And where was the million-dollar ransom?

Bill Swanson wrote a meticulous account of the Piper kidnapping, "Stolen from the Garden." But, the Willow River murders account for just two pages in the twisted tale. That’s in part because Swanson is convinced Larson and Callahan are not the Piper kidnappers.

"So that theory became that Donny was going to shut up this witness. It just doesn’t make sense on any level and I don’t care how dim a bulb Don Larson may have been," Swanson said.

The FBI had a rogue's gallery of more than 400 suspects for the Piper kidnapping, most of them culled from the usual suspects for criminal activity in the Twin Cities. In fact, Larson had already been convicted of an armed robbery of the Lake Street Liquor store and given a life sentence, that was reduced to a few years on appeal.

But there were other notorious suspects on the FBI’s radar, like "Wild Bill" Cooper, a reputed drug smuggler and adventure seeker, who ran the Squirrel Cage Bar in Willow River.

Cooper jumped bail and vanished just before he was reportedly about to tell the FBI where the ransom money was buried, in exchange for his freedom.

Could he have been a long-rumored third accomplice? And what of Larson’s wife? What exactly did she know?

The former deputy believes Ruth Larson, a former schoolteacher, may have written the ransom notes.

"The writing didn’t match either Donald Larson or Callahan," said Olson. "I have a feeling that maybe the wife wrote it."

Frederickson, the Pine County Attorney and local history buff, wonders if DNA and other forensic tools so common today could have connected the Piper kidnapping with the Willow River murders. A spokesperson for the FBI told the FOX 9 Investigators it is unknown if the physical evidence from the Piper kidnapping still exists.

The FBI tracked the serial numbers on the ransom money, but only 4,000 ever turned up.

Virginia Piper, for one, was convinced Donald Larson was one of her kidnappers.

She died long ago, but her philanthropy lives on. Her family gave $2 million for the Virginia Piper Cancer Institute at Abbott Northwestern Hospital, where she had been a long-time volunteer and board member.

And Donald Larson, known as ‘The Mouth’ in prison because he was a such big talker, always said he may be a killer, but he always denied any involvement in the Piper kidnapping. He died 13 years ago, taking any secrets with him.

In fact, most people directly connected with both the kidnapping in 1972, and the Willow River mass murder in 1976, have died.

Olson, the retired deputy and first on the scene in Willow River, is one of the few principals left.

"I was thinking that, too," Olson chuckled.