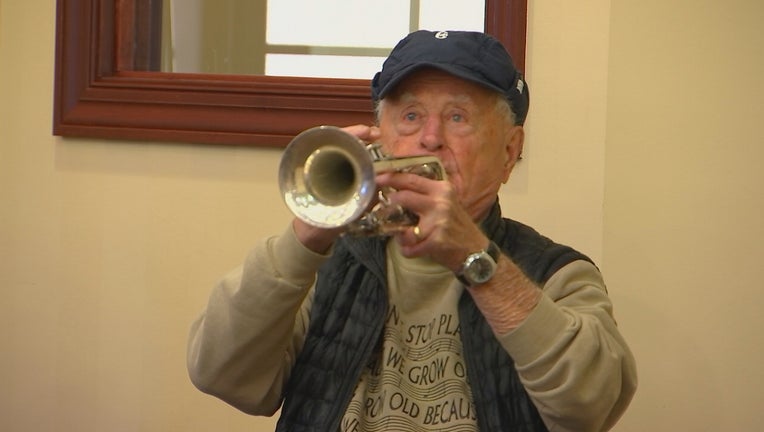 (FOX 9) - "Taps" has been offered as a final salute to military veterans since the Civil War. But the number of buglers available to play it are in short supply.

Over the last 18 years, Harry Reiner has played his trusty trumpet at more than 2,000 military funerals.

There are few ceremonies more somber than saying goodbye to a loved one for good. But Harry Reiner hopes to make it a little easier with every blow of his horn.

On this day, Reiner is providing the soundtrack for military honors for Air Force veteran Dorvin Baker.

The sounds that fill the air in an Andover funeral home not only pay tribute to Baker's service to his country.
They also comfort the family and friends he left behind.

"The reason I play in the Honor Guard is because it gives me a great deal of satisfaction that I can do this for the family. It's the last big event they are going to have," said Reiner.

Over the last 18 years, Reiner has played his trusty trumpet at more than 2000 military funerals.

Most of them are graveside, and he plays rain or shines while the Anoka Honor Guard presents the flag to the veteran's family as the service member is laid to rest.

"I have complete freedom doing what I want and nobody blasts me if I hit a bad note because they don't know the difference," said Reiner.

At 93 years old, Reiner is a good 20 years older than his fellow honor guard members, most of whom are in their 60s and 70s.

As the lone World War 2 sailor in a sea of Vietnam vets, Reiner says performing at military funerals is his way of still being of service to his community.

"It's sort of like having our Dad with us because our dads are World War II vets. My dad is deceased along with many others. But Harry is kind of a living reminder of that generation. They often call the greatest generation," said Mike Clark of the Anoka Honor Guard.

"They are my extended family. They are so respectful to me and there is quite a difference in age. They carry my horn. They carry my chair," said Reiner.

Reiner fell in love with his favorite instrument in grade school while growing up in New Ulm, but his horn went silent for a few years after he enlisted in the Navy after high school.

He picked it back up when he returned home and for the next few decades, he made quite a name for himself as a talented trumpeter with a number of bands playing everything from dance to Latin to jazz music around the Twin Cities and in his winter home down in Florida.

Even at his age, Reiner practices for an hour or two every day to keep his chops up when he's not visiting his wife Henrietta in memory care.

He wants to continue playing for at least 7 more years until he reaches the ripe old age of 100.

"It's a little unusual to get a good trumpet player who is old and can play because this stuff all goes to hell," said Reiner.

A shortage of buglers has some honor guards across the country playing pre-recorded taps from a computer chip inside a trumpet.

But Reiner believes there's no substitute for the real thing to send his fellow veterans off on the right note.

"I always thought I was going to die by falling off a bandstand. So far it hasn't happened," said Reiner.