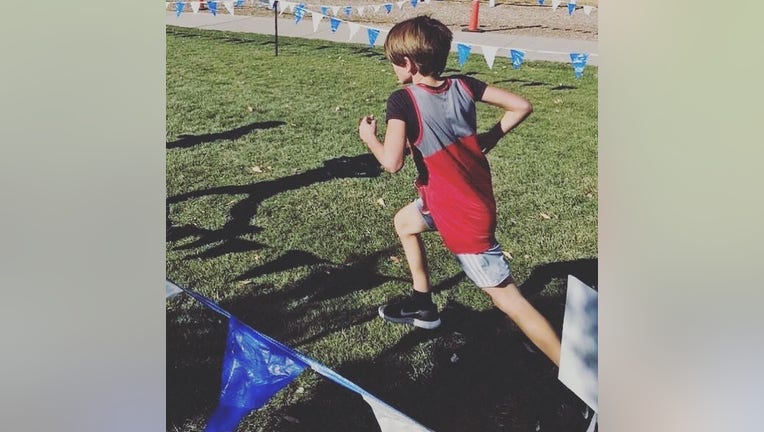 Kade Lovell, 9, accidentally won a 10K in Minnesota over the weekend. (Lovell family)

SARTELL, Minn. (FOX 9) - A 9-year-old boy from St. Cloud, Minnesota was born to run. In fact, after making a wrong turn during a 5K run, he accidentally won a 10K in Sartell a week and a half ago.

“I like wasting my energy and stuff, and sprinting and just running," Kade Lovell said.

The boy, from Sartell, Minn., is an avid runner, but gave his mom quite the scare when he didn't cross the finish line of the 5K.

Lovell practices at least three times a week, running two to six miles at a time. But at nine years old, he's already accomplished something adults several times his age have never done.

Lovell's mom said Kade's been running in races since he was 18 months old.

"He pretty much popped out running," she said.

When he didn't cross the finish line of the St. Francis Franny Flyer 5K, his mom thought he was having an off day - but her concern soon turned to panic.

"I thought, ‘maybe he is having a bad race. It happens. No big deal.’ Then these other kids coming running by... I was like, ‘he should be in front of them.’ Then I thought maybe he's hurt, maybe he got lost, maybe worse could happen…who knows," she said.

It turns out Kade missed the turn for the 5K run and ended up running the 10K route. By the time his mom found him at the end of that race, he was all alone and she thought he had come in last place.

"I accidently won it, and they've been practicing for a long time. I just was really surprised I did that," he said.

After his accidental win, Lovell ran another 5K sponsored by the Jacob Wetterling Resource Center. He won that race, too.

But, he wants to run 10K races in the future, only this time on purpose.

"I'm glad the way it turned out. I couldn't have asked for a better way for it to turn out, from me being scared to being excited and he did well," his mom said.

Kade is now practicing with a special running coach. He has already competed in the Junior Olympics and he plans to compete again in Wisconsin this year.