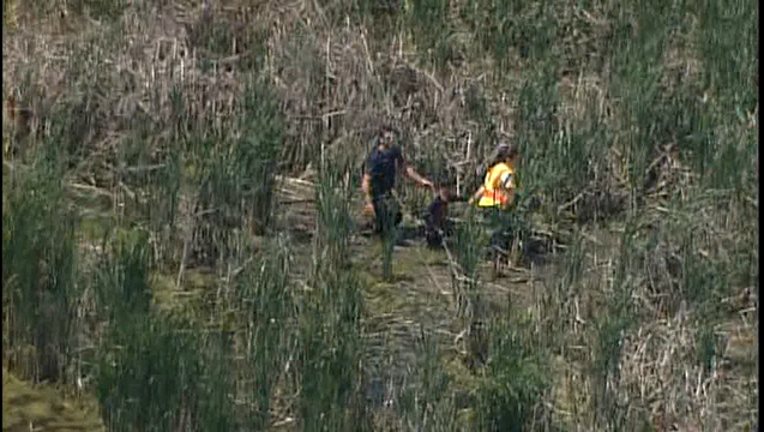 EDEN PRAIRIE, Minn. (KMSP) - A tense rescue had a happy ending at an Eden Prairie summer camp for disabled children.

Around noon, a nine-year-old at the True Friends camp ran off from the group he was with and right through a swamp.

The camp counselor could not keep up.

The State Patrol helicopter found him after about a ten minute search perched on top of what appeared to be a beaver dam.

Finding him was a relief, but it still wasn't easy to get to him or get him out. The boy, who is non-verbal, was not hurt.

"Several firefighters and police officers went into the marsh area and kind of fanned out in small groups, so we didn’t get lost in there,” said Becki White, Eden Prairie assistant fire chief. "The weeds were over our heads and the water was between ankle to waist deep up and down, so he got stuck a few times and we had to pull ourselves out."

“Earlier today a participant from True Friends’ Camp Eden Wood in Eden Prairie wandered away from camp staff. The individual was located safe and unharmed after a brief search. As per our existing safety protocols and procedures, camp staff immediately notified the authorities and other public service agencies.

“We would like to thank the Eden Prairie Police and Fire Departments, Hennepin County Sheriff’s Office, Minnesota State Patrol, the state DNR, Three Rivers Park District and many others who helped in locating the individual.

“True Friends provides life‐changing experiences that enhance independence and self‐esteem for over 5,000 children and adults with disabilities each year. We are extremely thankful that the individual was found safe and unharmed.”