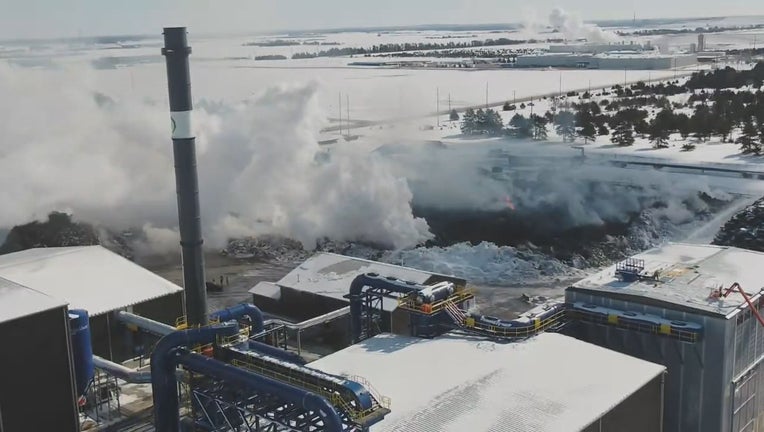 BECKER, Minn. (FOX 9) - Minnesota health and pollution officials are asking people to stay away from the Northern Metals facility in Becker while crews work to put out the fire and air quality testing continues.

Some testing completed by the Minnesota Hazardous Materials Emergency Response Team in Becker and Big Lake did not find any dangerous levels of sulfur dioxide, carbon monoxide or volatile organic compounds in the air, according to the Becker Police Department. Officials say while these tests are a "positive sign," other chemicals could still be found in the air through the tests being completed by the Minnesota Pollution Control Agency and a third party testing agency.

While the fire is under control, the impact of the fire, which started early Tuesday morning,&nbsp;still has yet to be fully understood.&nbsp;

While the fire is under control, the impact of the fire, which started early Tuesday morning, still has yet to be fully understood. Representatives from the MPCA, Minnesota Department of Health, Becker Police Department and Becker Fire Department gave an update on the Northern Metals fire in a phone conference Thursday afternoon.

Officials were uncertain of the size of the impacted area, saying potentially six to eight counties immediately near Sherburne County could be affected. Authorities say residents have reported seeing ash particles. Since officials do not yet know the makeup of the residue, they are asking residents to avoid contact with it and to prevent tracking it in their homes.

Assistant Becker Fire Chief Tom Wark says more than 100 cars have gone up in flames. Officials say the majority of the cars had their fluids removed, but some cars still had tires and upholstery.

Minnesota health and pollution officials are asking people to stay away from the Northern Metals facility in Becker, while crews work to put out the fire&nbsp;and air quality testing continues.

So far, there have been no reports of hospitalizations due to the air quality from the fire.

Wark says the fire is in the "overhaul" stage. He says well over 100 fire departments have helped with the effort, largely with the water supply. No firefighters have been injured at the scene.

Becker Public Schools will be resuming classes Friday after canceling school Thursday due to the fire, according to an update from Superintendent Jeremy Schmidt. The St. Cloud Hazardous Materials Chemical Assessment Team walked through the school and determined there were no dangers. However, if parents still want to keep their children home from school, the absence will count as excused.

"We believe that students are in a safer air environment when they are school," said Schmidt in a statement. "Our systems use filtered air and we have the capability to increase or decrease outside air, while many homes may not have this ability."

According to the City Administrator Greg Pruszinske, no water runoff from the firefighting has gotten into the storm sewers, Mississippi River or municipal water supply. The water instead has been captured in drain ponds, which will undergo testing.

An official from the State Fire Marshal's Office will be on-site Friday morning to begin an investigation into the fire.