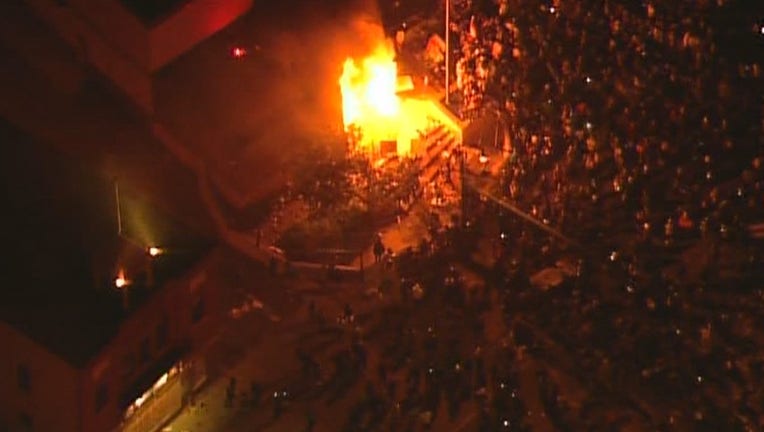 The Minneapolis Police Department's Third Precinct burns during a riot following the death of George Floyd in May 2020. (FOX 9)

MINNEAPOLIS (FOX 9) - Minneapolis city leaders have begun signing off on large workers’ compensation packages for dozens of police officers who left the department after the death of George Floyd and subsequent civil unrest.

By some estimates, those settlements requiring City Council approval could approach $35 million.

Minneapolis city leaders have begun signing off on large workers’ compensation packages for dozens of police officers who left the department after the death of George Floyd and subsequent civil unrest.

Attorney Ron Meuser claims his clients, former Minneapolis cops and firefighters, would give up any settlement payouts and immediately return to the job if they could.

"I think they felt for a long, long time that the community doesn’t want them, doesn’t respect them and doesn’t care about them," said Meuser.

Meuser says he represents about 200 men and women, the vast majority who took an oath to serve and protect, but now they claim injuries suffered over the last year make that no longer possible. Some of those injuries are physical, while others are mental, including post-traumatic stress following the police killing of George Floyd, the rioting, and torching of the Minneapolis Police Department’s Third Precinct.

Meuser is currently settling workers’ compensation packages with City Hall as his clients officially leave their jobs, including one for $250,000. The city is spreading out the payouts over several years to ease the financial impact. One council member told FOX 9 the mass exodus of officers is alarming.

"We’re pretty constrained in what we can say publicly about issues that include private information from city employees," said Minneapolis City Council President Lisa Bender during a city council committee meeting last month.

"In full transparency, we’ll likely have more of these on future agendas. Thank you for bringing that item to light," said Minneapolis City Council Vice President Andrea Jenkins.

With some 200 in the pipeline, that’s $35 million and a depleted MPD at a time when there are calls for increased safety and security across Minneapolis.

According to city leaders, MPD has about 645 sworn currently officers out on the streets today with more than 80 still on some kind of leave. The full staffing capacity for the department is 888.