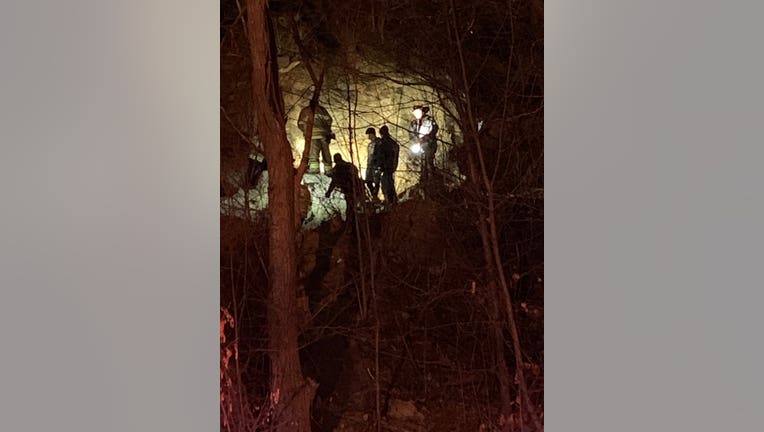 Three people were reported missing inside a cave in St. Paul, Minnesota early Wednesday morning. Firefighters located them and escorted them out. They were unharmed. (St. Paul Fire Department / FOX 9)

ST. PAUL, Minn. (FOX 9) - Police and firefighters responded to a cave in St. Paul, Minnesota early Wednesday after a woman reported her friends were inside and had not come out.

Shortly after midnight, police responded to the caves near Watergate Marina in Crosby Farm Regional Park. According to St. Paul Police Department spokesperson Steve Linders, a caller reported she, two men and another woman went into the cave and while they were inside, they encountered another person who asked them to look at something deeper inside the cave.

The two men went with the stranger while she and the other woman left the cave. They waited for two hours and, when the other three had still not emerged, she called 911.

The St. Paul Fire Department technical rescue team also responded to the cave. Spokesperson Roy Mokosso said crews went inside, located the three individuals and escorted them out. Crews evaluated them and determined they were unharmed.

Mokosso said the group was believed to have been doing some “urban exploring inside the cave.” Entering the caves is illegal and extremely dangerous, he said.

Police cited all five people involved—two 18-year-old women and three men, ages 19, 20 and 23—with trespassing and released them at the scene.