(FOX 9) - Two people were killed, and another three were injured in separate alcohol-related crashes in Chisago and St. Louis counties on Friday.

A 40-year-old man from Virginia, Minnesota, is facing charges of Criminal Vehicular Homicide and Driving Under the Influence after a crash in which he allegedly drove his pickup truck over the center line while traveling westbound on Highway 21 and struck a passenger car head-on, killing a 39-yer-old woman who was driving in the opposite direction, according to a press release from the St. Louis County Sheriff's Office.

First responders pronounced the woman dead at the scene. The driver of the pickup truck sustained non-life-threatening injuries, and paramedics took him to a hospital in the Duluth area.

The Sheriff's office said that "alcohol was a major factor in the crash," which remains under investigation. The name of the victim was withheld pending notification of family.

A 50-year-old man was driving a Chevrolet Truck southbound on Interstate 35 near Wyoming in Chisago County with two passengers  — a 33-year-old woman and a 37-year-old man — when he struck the right guardrail and then rolled into the left median at about 12:15 p.m. Friday, according to an update posted by the Minnesota State Patrol.

Neither passenger was wearing a seatbelt, and both were ejected. The 37-year-old man died at the scene, and paramedics took the woman to Regions Hospital for non-life-threatening injuries, according to the State Patrol.  The State Patrol lists alcohol as a factor for the 50-year-old driver. 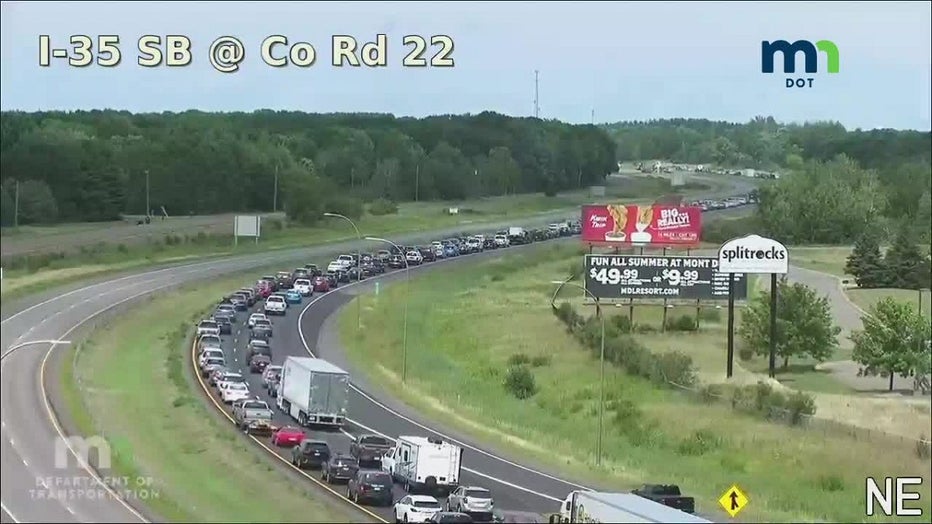 Traffic backed up due to a crash on I-35 in Wyoming. (MNDOT)

According to a report on crashes in Minnesota released by the state Department of Public Safety last year, DWIs have been trending downward since 2006, which analysts attribute to a decrease in public acceptance and the rise of ride-share services, but the state still sees an average of 62 DWIs per day.