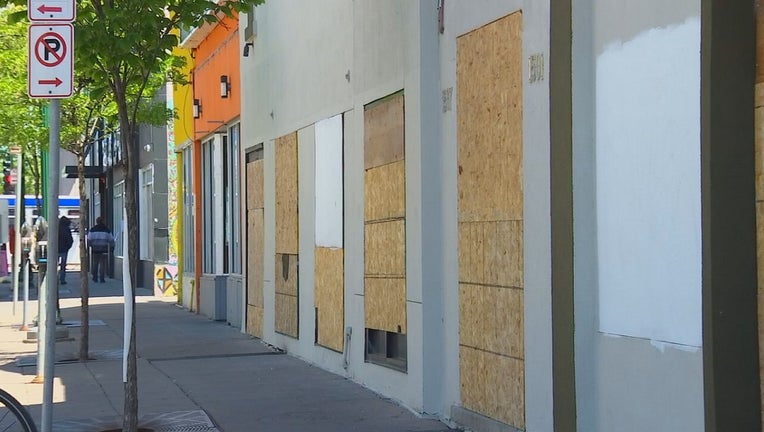 A business with bordered windows remains along Lake Street as the post-riot recovery continues in 2021. (FOX 9)

ST. PAUL, Minn. (FOX 9) - Twin Cities business owners whose buildings were damaged in the 2020 riots see their last, best chance at government aid after politicians have left them fending for themselves for the past year.

Legislators face a make-or-break special session later this month to pass a state budget and avoid a July 1 government shutdown. Top lawmakers and Gov. Tim Walz agreed to $150 million for businesses in a preliminary budget pact reached May 17, but exactly how it would be spent remains a mystery.

Business owners want state lawmakers to help them recover from last summer's riots, but many questions loom about the details.

"Why does it take government so long to react to an emergency? It's been a year," Henry Jimenez, executive director of the Latino Economic Development Center, said in an interview. "If there’s $0 that gets dedicated (for riot relief), I think the Legislature has failed."

The $150 million is for broad business relief, not riot damage specifically. Republicans are seeking to send part of the funding to outstate Minnesota businesses affected by the COVID-19 pandemic, while Democrats favor a larger portion for businesses damaged in the 2020 unrest.

Civil unrest following the police killing of George Floyd in Minneapolis caused an estimated $500 million in damage across the Twin Cities. Business organizations say many owners have rebuilt with private money -- including insurance, foundation grants and private donations -- but no help has come from government, and many businesses have not been made whole.

House Speaker Melissa Hortman and Senate Majority Leader Paul Gazelka said this week that negotiations are happening in the Jobs conference committee, but they were unable to say much about how a future business relief program would work.

"(The Jobs conference committee) is still working through whether it’s grants or low-interest loans. The governor has a pot of money that he can also use for some of that," said Gazelka, R-East Gull Lake. "I do believe we’re much closer than we were a week ago."

On the morning of May 28, 2020, Lake Street business owners began picking up the pieces of an overnight disaster from rioting and looting.

Unclear is how the money will be divided between the Twin Cities and Greater Minnesota or how businesses will qualify. Another lingering question: whether Walz can use a portion of the $500 million pot of federal COVID relief money that he controls to aid businesses.

Teddy Tschann, a spokesman for Walz, said administration officials think they can use the federal money for riot relief. He did not say whether the governor was planning to do so.

Hortman said the overall $150 million amount had been settled.

"What we wanted to make sure is that if a business was damaged through no fault of their own, the state would be bringing some assistance to the table," said Hortman, DFL-Brooklyn Park.

Uncertainty lingers over the entire budget process. Gazelka and Hortman said this week that a special session will start on June 14 and have expressed confidence about getting a final budget before June 30, though they did not provide documentation of agreements they said had already been reached.