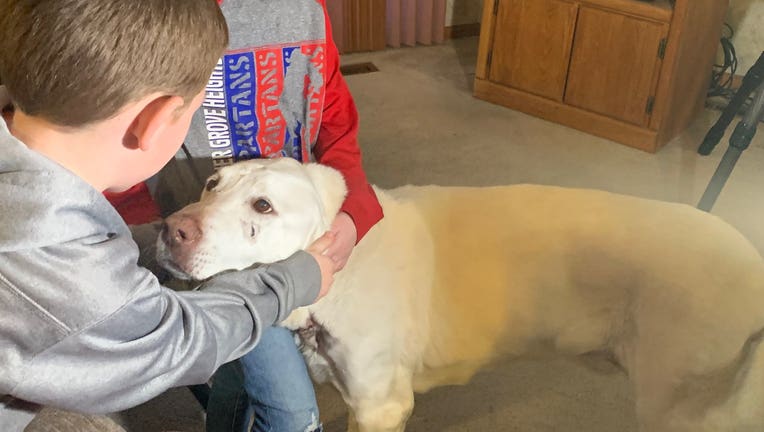 Mr. Moose, a 12-year-old Labrador, is on the mend after fending off an attack by multiple coyotes in Inver Grove Heights. (FOX 9)

INVER GROVE HEIGHTS, Minn. (FOX 9) - It’s not rare to see coyotes around Twin Cities metro neighborhoods, but a recent attack in a suburban area is raising concerns about how bold these urban coyotes are getting.

An Inver Grove Heights family says their dog “Mr. Moose” came out to a backyard as he does every morning to go the bathroom when he was attacked at the edge of the woods by coyotes.

It’s not rare to see coyotes around Twin Cities metro neighborhoods, but a recent attack in a suburban area is raising concerns about how bold these urban coyotes are getting.

Mr. Moose is a beloved member of the Frankot family and lately, he’s needed a little extra attention because of the attack.

The 12-year-old Labrador is being nursed back to health after his owners say he was attacked by more than one coyote over a week ago when they let him outside in the morning.

“I opened the door and he comes out of the woods and he was all ripped up and bleeding and said, ‘Come on, Moose. Come on, Moose.’” Frankot Miller added.

The attack nearly cost the dog his life.

The family has seen coyotes in the back of their Inver Grove Heights home before. They live in the suburbs with a wooded backyard, but they never thought a dog the size of Moose would be their prey.

“You open the door and they scram, so it’s very shocking they actually attacked,” Frankot Miller said.

The DNR confirmed this kind of attack on a Labrador is rare, but says the urban coyote population is growing. Right now, the University of Minnesota has a study underway to look at the impacts of more of these animals in urban environments and what that means for people and pets. You can report coyote sightings at this U of M web page.